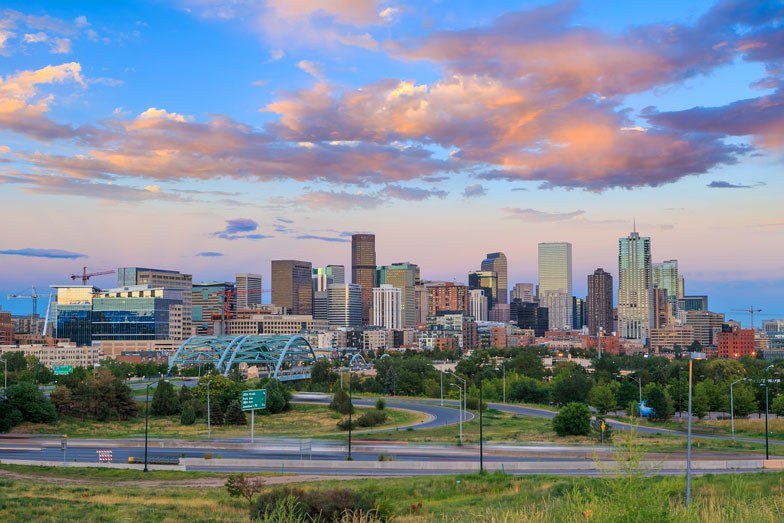 Flanking the southeastern side of the Denver metro area is Aurora, Colorado.

It’s the third largest city in the state and provides a great influence in the cultural and entertainment options in the Denver region.

This city itself is large enough and versatile enough to be a paradox.

On one side, you have dense suburban neighborhoods with shopping, dining, and hotels as far as the eye can see.

On the other hand, you have more than 100 miles of trails and 8,000 acres of open land to explore.

Aurora can be a great home base for a trip to Denver or a starting point for a trip into the Rocky Mountains to the west.

In a unique twist, you can also go scuba diving in this landlocked city.

With plenty of hotels on the I-255 corridor, you’ll also have easy access to Denver International Airport.

You can also be in Denver within 30 minutes if the traffic works in your favor.

Aurora was the scene of a mass shooting attack inside a movie theatre in 2012.

Twelve people died, and 70 were injured.

The shooter is serving multiple life sentences for the attack.

There's a medium overall risk in Aurora, with the city taking the #2 spot of most dangerous cities in Colorado. Between Denver and Aurora, the cities are dealing with a violent crime rate that law enforcement can't get a handle on, as the departments face ongoing staff shortages. The city has a lot to do, but it has some risks.

RTD is the public bus and rail system throughout the Denver area, with multiple stops in Aurora. Taxis, rideshares, and rental cars are easy to get. When visiting Aurora, there's a medium risk when using public transportation. The route along Colfax between Aurora and Denver had 57 attacks from 2021 through February 2022. The MALL Bus Route, which is a free ride, had the second-highest number of attacks.

With more than 40 pickpockets or purse snatching reported in 2020, there's medium risk. Always safeguard your belongings and don't bring valuables with you. Keep anything that isn't necessary back at the hotel in a safe.

The city gets twice as much snow as the national average, and winter storms can be intense here (but also make for some great skiing in those mountains!). Severe thunderstorms and tornadoes are possible during the warmer months. There's a medium risk because of the issues that could happen here.

The robbery rate is two and a half times the national average, but in 2020, only 25% of the robberies happened in public places. With the growing violent crime rate, we're sticking with medium risk here. Avoid any gathering that seems like trouble is brewing, and never fight back against a criminal trying to rob you. Be as compliant as possible and remember as much as possible to be a good witness.

The Denver area is a major transportation and distribution hub, plus it's a large metro area. Those elements feed a medium risk, but there's also a good dose of Homeland Security protection and programs to reduce risks. Nearby Buckley Air Force Base poses a risk and a sense of safety.

There's a low risk of a tourist scam, as criminals here are more likely to take things by force. However, should you lose a wallet or get personal data stolen from a vehicle, you can report the theft online through the police department's website.

Women have a medium risk when visiting here. While data shows they are slightly less likely to be the victim of a violent crime, the sexual assault rate is more than twice the national average. Don't be out alone in Aurora after dark and drive with the car doors locked.

The 2022 Water Quality Report shows no violations and full compliance with all state and federal standards. Over the past five years, the water utility has received a handful of awards, from safety in treatment plants to best-tasting water samples.

Safest Places to Visit in Aurora

The oldest Aurora neighborhood is near Colfax Avenue and Galena Street.

There is a walking tour map available on the city’s website where you can see some rich architecture.

Peek inside the Fox Arts Center to get a glimpse of a post-World War II theatre.

There’s also a guidebook online you can download or print to learn about each building along the route.

Several memorial sites are open to the public.

Babi Yar Memorial Park honors the victims of the Babi Yar ravine outside Kyiv in the early 1940s.

The Colorado Freedom Memorial honors the soldiers killed in the line of duty since Colorado became part of the United States.

The 7/20 Memorial is a sculpture paying tribute to the victims, survivors, and families impacted by the Aurora movie theatre shooting in 2012.

The Aurora Reservoir is a great way to enjoy the beach in a mountain state.

SCUBA Beach is on the northwest side of this reservoir, and scuba diving is allowed during daylight hours.

This is also a popular fishing spot.

Cherry Creek Park is so popular the state park service warns there might be lines to get in!

Camping and fishing are allowed here during certain seasons, and it’s a great place to get on the water in the summer with a Waverunner or kayak.

There are even spaces to fly model airplanes, take a horseback ride, or spend time at the shooting range.

At the corner of Alameda Parkway and Chambers Road is a garden that’s built with low-water plants.

This is a great way to learn about water conservation while still being able to grow plants and flowers.

I have to chuckle when I say that because I do NOT have a green thumb.

I once killed a cactus in the desert.

I planted it in front of my house, and as it turns out, I OVER watered it.

It was a good lesson in drought gardening, and this display is another great way to learn without doing it the hard way.

Golfers have nine courses to choose from, and that’s just in Aurora.

Enjoy the sunshine and tee off at your preferred location.

There are a lot of suburban shopping areas in Aurora, but the Southlands is one of the most popular.

There’s even an ice rink in the winter!

The Stanley Marketplace is another gathering spot with plenty of dining options and live music with family-friendly activities.

To really go back in time, visit the Plains Conservation Center on 1,100 acres of space with historical relics and buildings.

Places to Avoid in Aurora

The neighborhoods around the length of Colfax can be dangerous, especially as you get closer to Denver.

The farther southeast you go, the safer the neighborhood is.

Avoid walking around alone at night.

Drive with your car doors locked, and always lock the car when you park.

Don’t leave the windows rolled down either.

Half of all the thefts here involve car break-ins or burglaries.

There’s a misconception that Colorado is all mountains.

Like you cross the state line from Nebraska or another eastside state, and you’ll suddenly be in the Rockies.

You actually have to be almost 200 miles into Colorado before you are in the foothills.

Aurora is on the “flat” side of Colorado and about 60 miles from Rocky Mountain National Park.

You’ll still get great views, but they are in the distance.

Safety Tips for Traveling to Aurora

So... How Safe Is Aurora Really?

The police department has launched a DART program to prioritize targeting violent crime offenders and making the streets safer.

One of the main problems with crime in Aurora is a lack of relationship between the community and law enforcement.

With gun violence, gangs, and drug dealers causing ongoing issues, the community doesn’t always have faith in the police.

There are also concerns about racial bias, which has prompted several new transparency programs to build better relationships.

This was fueled by the death of 23-year-old Elijah McClain, who was walking down a street when someone reported him as being “suspicious.”

After a series of missteps by the police, McClain ended up in a coma and later died.

In 2020, 21% of violent crimes were against strangers, and 24% of robberies were in public places.

44% of violent crimes happened in homes.

While it’s not common for random acts of violence to happen, there’s a concern about being caught in the crossfire as an innocent bystander.

The crime data from 2020 shows less than a one in 100 chance of being a victim of a violent crime, and the numbers have gone up since then.

The risk of being a theft victim was one in 50.

You do need to use caution when visiting the busier parts of Aurora, in the shopping areas and suburban amenities.

The risk is lower in the parks of Aurora.

While there’s a lot to do here, this is part of a major metro area and requires all the basic crime safety steps as if you were in Chicago.

How Does Aurora Compare?