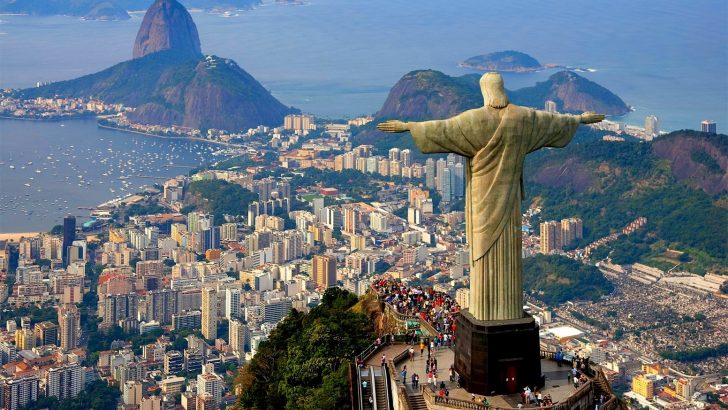 Brazil, the largest country in South America and the fifth-largest in the world, is probably the most famous one in the entire continent.

A dream for football lovers, since it’s the cradle of football tradition and a paradise for fans of festivals, music and partying, this country hosts around 6 million tourists each year.

The vibrant urban life is more than obvious in São Paulo, and the spirit of this joyous country can be felt at the famous Carnaval in Rio de Janeiro, as well as those in Salvador, Recife, and Olinda.

You can experience the cultural energy of Pernambuco and Bahia, and, of course, immerse yourself in the wilderness of the Amazon rainforest and the world-famous Iguaçu Falls,

There is so much to see and do in Brazil, just concerning nature, that you probably won’t have time to do it all during one trip.

There’s the Amazon River Basin that holds more than half of the world’s remaining rainforest, and as much as 60% of it lies in the North of Brazil – it is truly a natural sight worth seeing, a mesmerizing proof that nature itself is a wonder.

Brazil’s waterfalls of all shapes and sizes are a different story, with Iguaçu Falls stealing breaths in eastern Parana.

These are among the most spectacular waterfalls in the world.

Brazil is somewhat safe but you should take precaution on the streets of major cities, and after dark. Be wary of pickpockets and bag snatching and keep your valuables safely by your side. Never carry all your money in one place or leave your valuables in plain sight in a car or at a beach when swimming.

Public transport is generally safe in Brazil, though it has its dangers. Be careful on buses and bus stops since that's where pickpockets and petty thieves operate.

Pickpockets are a common occurrence on the streets of Brazil and tourists are recommended to remain vigilant at all times when on the street. Make sure you don't flash your valuable possessions on the street, or better yet, leave them in your accommodation. When in Rio, be extremely aware of your surroundings.

There are some natural threats in Brazil, such as dangerous insects and diseases they carry, and riptides. This is why it is important never to go swimming alone.

Mugging is not altogether uncommon on the streets of Brazil. In such a situation, hand over all your possessions immediately and do not resist. Avoid poorly lit and deserted areas.

Although there haven't been any terrorist attacks in Brazil's recent history, they shouldn't be ruled out so remain vigilant at all times.

Traveling to Brazil is generally safe for solo women, but bear in mind that you should always hike in company, never alone. Be especially careful in the North East and the remote area of Amazon. Stay away from poorly lit and deserted streets and areas and from people that are visibly intoxicated or under the influence.

So... How Safe Is Brazil Really?

Brazil is one of the most criminalized countries in the world, and therefore, it is not the safest choice.

But if you keep your wits with you and follow rules of precaution, you will minimize the chances of something going wrong.

The golden rule in Brazil is never to wear bling in public, or anything gilded, diamond-encrusted or oversized.

You are advised to always keep a small amount of cash with you (preferably cleverly hidden, concealed in a money belt under your clothes, in secret sewn-in pockets, or in your shoes) and to avoid carrying bank cards.

If you go out shopping, it is smart to return your purchases to your accommodation before you head out to dinner or to a bar.

The statistics when it comes to violent crime in Brazil do not offer a sunny prognosis: though the cities of Rio, São Paulo, Recife, and Salvador are ridden with crime throughout the year, it skyrockets when tourists arrive in hordes during Carnival and festive holiday periods.

Never assume that you’re safe if you remain on-the-beaten-path.

Tourists are walking targets, be it day or night, in tourist-frequented areas including Copacabana Beach, Corcovado Mountain, Tijuca Forest, and Leblon.

Pickpockets have a bunch of creative diversions to distract you long enough for them to steal your wallet.

Never carry all your money in the same place and keep your belongings close to you at all times.

How Does Brazil Compare?