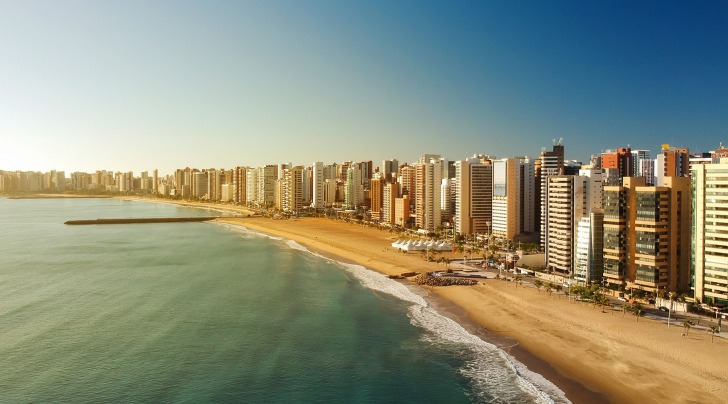 Fortaleza is one of the largest cities in Brazil – it’s about 2,5 million people- and certainly one of the most vibrant.

It’s a quite a party town, but the carnival in Fortaleza is rather feeble, although growing bigger by the year, with the largest parades being Maracatu-style.

Quite an effort has been put into restoring colonial architecture over the last years.

Stretch from the beachfront of Praia de Iracema, via Dragão do Mar and to Praça do Ferreira is steadily improving and worth a walk.

Here also are several lovely places for surfing on the beaches, and frequent competitions at Praia do Futuro.

Most of the risks in the city are related to the possibility of being robbed. You should be especially careful not to carry valuables and cash. It is also recommended not to appear on the streets after dark. Avoid drug dealers and prostitutes on the streets.

Public Transport is generally safe in Fortaleza. Be very careful with your valuable belongings in buses - as incidents inside buses have been reported. One thing tourists should worry about is taxis. Always take official, licensed cabs. Do not get in any unmarked taxis, especially if someone has solicited a ride for you.

Pickpockets and petty thieves are a significant problem in Fortaleza. They roam the city center and the beaches looking for easy victims in the face of tourists. Avoid carrying too much cash with you, use credit cards. Always have a copy of your ID, passport, or other relevant documents.

The region is prone to droughts - and as a result - to forest fires. But the likelihood of this is low. Floods and landslides are also possible here. Examine the weather and the current situation for natural disasters before you travel here.

The risk of being robbed is very high in the city. Especially in specific regions and on the outskirts of the town. Criminals hunt for easy prey in the form of tourists. Do not walk in the streets of Fortaleza at night and move in groups, not alone. If you were attacked - give everything you ask and contact the police immediately.

Even though in the history of Brasilia, there were no terrorist attacks, the proximity to Venezuela and its conflicts makes it possible to attack the capital of Brazil. Besides, like any capital, the city is especially attractive to terrorists. Be on the alert and avoid political demonstrations.

Fortaleza tourist scams are common. You can be fooled by selling fake admission tickets or selling "branded" things that turn out to be false. Criminals also often work in pairs - one will distract or ask you about something, while the second can empty your pockets. Also, withdraw money only ATM at banks to avoid scams with a card.

Women are not recommended to travel to Fortaleza alone; the risk of getting into trouble is very high. It is better to move around in a group and be sure to take a taxi if you return to the hotel late at night.

So... How Safe Is Fortaleza Really?

Fortaleza is generally considered a not-so-safe city for tourists and has one of the highest crime rates in Brazil.

The index of crime is very high here, most problems here are with home broken, car thief, armed robbery, violent crime and corruption, and bribes.

The city occupies the number 7 spot on the list of cities with the most homicides per 100,000 people in the world.

This type of violence though it doesn’t usually involve tourists, and most have no problems visiting Fortaleza after taking some necessary precautions.

As with any other city, there are some areas in Fortaleza where the crime rate is much higher than in other districts.

Some areas to avoid or be especially vigilant: Cais do Porto and Serviluz slum; Commuting between Praia do Futuro and Centro; beaches – never enter beaches after dark; Suburbs – like almost everywhere else in Brazil, the city suburbs host the highest amount of homicides, armed robberies, muggings, etc.

Tap water is not drinking in Fortaleza.

If you travel west from, into the states of Maranhão, Pará, or further, Brazilian authorities recommend that you get a yellow fever vaccination.

You can feel quite comfortable in Fortaleza if you use common sense, don’t walk around the city at night, don’t mess with drug dealers and prostitutes (men tourists, in particular, are often the victim of drugging and robbing crimes by prostitutes) and move around the city in groups, not alone.

How Does Fortaleza Compare?