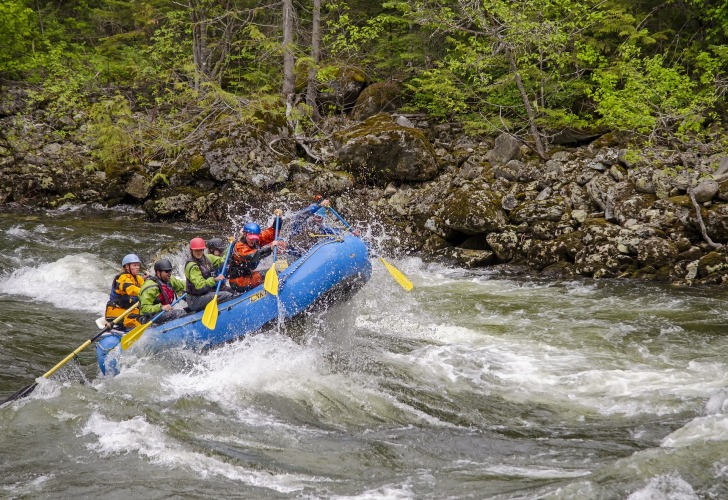 The secret is out about Missoula, Montana.

If you visit here, you might end up moving here.

This mountain wonderland is a mixture of everything you want in an outdoor lifestyle while having a funky, eclectic downtown area brimming with new restaurants and boutiques.

What was once a mountain escape for busy city slickers is turning into a population boom and housing chaos as prices surge and demand swells.

Platforms like Zoom and others allow people to work from anywhere so they’re coming from places like Washington, Oregon, California, and even Colorado,” Brian Wahlberg, a real estate agent, told the Missoula Current in 2021.

This is the home of the movie “The River Runs Through It”, but a lesser-known fact is the movie wasn’t shot in Missoula.

It was done in central Montana.

Technically, three rivers run through it in Missoula, where fishing, boating, and water activities abound in all seasons.

Nestled in the northern Rockies, this is an escape to a paradise you can’t find anywhere else.

It’s not all snow-capped perfection.

There is an underbelly of crime here that travelers need to be aware of before heading for the hills.

There's low risk when taking a taxi or rideshare in Missoula. There are two taxi services and Uber and Lyft are available. Two shuttle services can take you to and from ski resorts or popular outdoor destinations.

There's a low risk for pickpockets in Missoula. The robbery rates are down from 2018. There are other crime factors like aggravated assault and homicide that cause safety concerns and the Missoula Police Department is taking steps to address those issues.

There's a medium risk of natural disasters given the long, cold, snowy winters and the wildfire potential. The website Hazard Ready lists the biggest concerns for natural disasters at any given address. Winter blizzards could shut down the city in a worst-case scenario, and nearby wildfires could impact air quality. There is a low chance of a tornado, but the area can get garden-variety thunderstorms in spring and summer.

There's a medium risk of being mugged in Missoula. With a lower robbery rate, but growing violent crimes, it's best not to fight with your life for one of your belongings.

There's a low risk of terrorism in Missoula with no hard targets nearby. Montana has made news headlines the past few decades with several militia groups like the Montana Freemen, Project 7 Militia, and the Militia of Montana, but those don't have an impact on tourists in Missoula.

Missoula gets a low risk of scams. The Montana Department of Justice lists the most common scams, and they are no different than those happening nationwide.

There's a medium risk for women traveling to Missoula. Crime statistics show rapes were down 43%, but that leaves 60 rapes reported. The biggest concern for women is domestic violence, and the city faced allegations by the Justice Department in 2014 that crimes against females were not treated with the tenacity of other crimes nor were officers trained to handle the delicate nuances of the crime. That started a more proactive approach toward the way officers handle crimes and how courts push them through the system.

There's low risk when it comes to using tap water in Missoula. The 2021 Annual Water Quality Report showed the drinking water is at or above state and federal requirements.

Safest Places to Visit in Missoula

The Heart of Missoula is the name of the downtown neighborhood on the north side of the Clark Fork River.

There are plenty of hotels, restaurants, boutiques, and music venues in this vibrant part of the city.

There is also a growing homeless population that could lead to panhandling on the street.

With the surge in population came a surge in transients.

It’s not an immediate safety risk, but something to be aware of when you venture through an otherwise picturesque area.

River Travel Magazine rated Missoula the “Best Riverfront Community” in America and you can bet police and community leaders want to keep it that way, so they keep a close eye on crime near the water.

Some of the transients gather under a bridge near the downtown area, so it’s best to stay on the walkways during the day.

Across the river is the University of Montana with its police department monitoring safety.

Further south, the Lewis & Clark neighborhood is a gateway to several trailheads into the wilderness.

There are several casinos in Missoula and the legal gambling age is 18 in Montana, a rare break from the traditional 21-year-old rule most states have.

Places to Avoid in Missoula

The northern part of town has the highest crime rates, and chances of being a victim could go up to one in 13.

The southwest side of town is safer but isn’t near the tourism corridor of downtown.

There’s a meth problem in Missoula and it doesn’t stop at a certain neighborhood line.

When visiting, it’s best to avoid any situation that might involve someone acting erratically as they might be using the drug.

The Missoula Police Department believes the increase in violent crime across the city is mainly due to this growing problem.

Not only is a drug task force working to stop the drug pipeline, but they are also reorganizing the courts to better help addicts recover while paying their debt to society.

If you are an outdoorsy type, be careful when going into the wilderness alone and bring a buddy or guide if you can.

Bears and other wildlife pose a risk to tourists and the harsh winter conditions can easily knock down the strongest hiker.

Elevations go up quickly in this mountain area, which can impact breathing and lung capacity quickly.

Safety Tips for Traveling to Missoula

So... How Safe Is Missoula Really?

Missoula is going through a population boom it might not have been ready to handle.

With more people moving to the community, driving up home prices and the cost of living, it’s pushing out some lower and middle-class people who can no longer afford to live there.

That could be one reason the homeless population continues to grow and the city continues to find places to house them.

There’s a battle against meth on the streets of Missoula.

The drug is driving up violent crime rates and the police are struggling to keep up with the problem.

Police and community leaders are meeting probably as you read this to continue to find new and innovative ways to stop the drugs.

You could argue that with a population increase of 10% in the past decade, the city must be safe for so many people to make a move, but with any growth comes blight.

If you stay in the tourist areas, use common sense safety when walking through town or in the mountains, this should be the safe getaway you’ve been needing.

It helps to know this isn’t one of those “leave your door unlocked at night” communities, so you can best practice your safety measures.

How Does Missoula Compare?