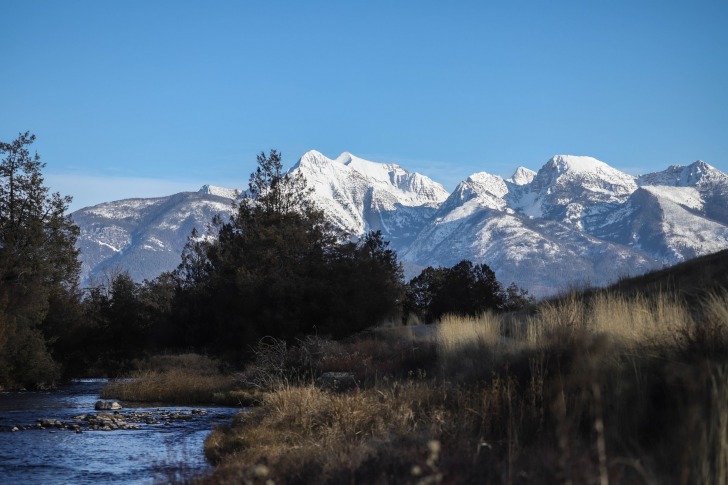 There’s a lot of magic in this Montana town, and it’s not just smoke and mirrors.

The city’s nickname is “The Magic City”, born from the seemingly magical way to town popped up back when the railroad came to life in the 1880s.

This is the largest city in the state, which doesn’t say much in a state of very small towns, but it’s where people come to shop, dine, visit, and explore.

This is a place where you can do it all and get away from it all in one visit.

While there’s enough to do in Billings in its own right, it’s also a pathway to Yellowstone National Park, just 100 miles south.

This brings a lot of foot and road traffic.

As with other Montana cities, Billings is experiencing exponential population growth as people now accustomed to working from home are leaving the big cities for mountain life and enjoying the best of both worlds.

Billings does have a higher crime rate than the Montana and national averages.

One local leader called it an epidemic.

It’s fueled by a recidivism rate of convicts on parole disproportionally sent to Billings.

Discussions are underway to fix it, but solutions are hard to find.

There is medium risk in Billings, Montana. Between the high crime rates, drug problems, and harsh winter weather, it's good for a tourist to keep their eyes peeled and head on a pivot while enjoying this beautiful community.

There's low risk with taxis, rideshares, and public transport, but to be honest — you'll probably want to have a car to get around since everything in town is walkable and anything outdoors might take a longer drive. 26 miles of walking and bike trails surround the city.

Every sector of crime went up from 2019 - 2020, giving this a medium risk. The city is home to 24% of the supervised parolees, much larger than any other Montana city. Law enforcement says it's these prior criminals causing the crime spike and the jails are overcrowded, to begin with, so there's little room to house re-offenders. Keep an eye on your belongings and don't draw attention to any precious items.

We give this medium risk due to the avalanche potential, heavy snowfall, and bitterly cold temperatures in the winter combined with wildfire and high winds risk in the warmer months. Tornadoes and earthquakes are rare in this area.

Those high crime rates require a medium risk for this category. With the larger-than-normal number of former criminals in this community, crime might be a little more brazen when it does happen. Aggravated assaults, larceny, and burglary were all up more than 20% in 2020.

There's a low risk of terrorism in Billings. The nearest natural treasure is Yellowstone Park, just about 90 minutes south, but there are bigger things to worry about when it comes to safety in Billings.

There's a medium risk of scams due to the criminal presence in the community. Savvy travelers should avoid anything that seems too good to be true and should limit who they give personal information to unless it's necessary. Buying tickets to events and sightseeing ahead of time is a great way to avoid getting scammed.

While Montana has a "good ole boy" reputation in some minds, women do have a strong presence in this community. Given the increasing crime rates and the 30% increase in rapes from 2019-2020, we're going to go with medium risk for this community. Women traveling here might want to check out the Yellowstone Valley Woman website to make some female connections before traveling and get a better lay of the land. Bonus? The January/February 2022 edition has an article titled, "With drug addiction & crime on the rise, meet the women facing this threat hoping to take back our city."

The water in Billings comes from the Yellowstone River and goes through several steps of treatment before making its way to the tap. There's a low risk of dangers in the drinking water and the supply is monitored around the clock to make sure it's always safe to drink.

Safest Places to Visit in Billings

Let’s put the current topics of crime concerns on hold and take a dip back to the past.

Billings is full of historical activities that are safe and educational for tourists.

Walkthrough 35,000 artifacts at the Western Heritage Center and you’ll feel like you’re back in the old west.

Many of the safest attractions are also the most outdoorsy.

The Rimrocks is a proper noun and a geological defining point of Billings.

Rimrocks are sandstone cliffs near the city.

ZooMontana hosts a wide variety of animals, including the ever-popular sloth named “Winston” who has his own Instagram account.

Downtown Billings is a great place to wander and nibble around as boutiques, cafes, and art collections fill this section of the city.

This is also where any nightlife in the city is going to happen.

Places to Avoid in Billings

Billings has a population of around 110,000 people, so there aren’t too many good or bad neighborhoods since everything is so close.

Crime maps show the farthest west of town you are, the fewer crimes are reported.

In November 2021, Billings residents voted for a $7.5 million infusion to increase public safety, but it’s still to be determined how much that helps crime rates.

They are trying, though, to make this a safe place to live and visit.

Billings is a tight-knit community and it’s not always easy for outsiders to start up a conversation.

If you do, know that a firm handshake, looking someone in the eye, and a hearty thank you go a long way if you ask for help or advice.

Safety Tips for Traveling to Billings

So... How Safe Is Billings Really?

Yellowstone County Attorney Scott Twito said this to Montana lawmakers, “This is unlike anything that anybody in the state of Montana has seen, so we need solutions from you that help us here (in Billings).”

Another lawmaker insinuated the Department of Corrections gives a “bus ticket to Billings” for those just released from prison.

The city is facing a surge in crime that it can’t quite get a grasp on.

There are released convicts on parole under state supervision in this community at a rate that is higher than the average distribution in other Montana cities.

There aren’t enough courts or health programs to get criminals reformed, though that is the main focus of city leaders and police from 2022 forward.

You aren’t necessarily in danger when you go to Billings.

It’s just a small town dealing with some big-city issues.

All the beautiful mountain getaways and local culture still exist and thrive.

You just need to keep your wits about yourself when dealing with people throughout the community.

How Does Billings Compare?