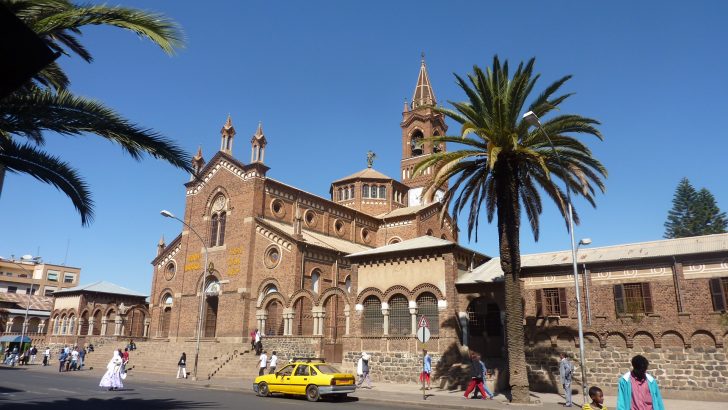 Eritrea is a country located in East Africa, squeezed in between Djibouti and Sudan, sharing a long border with Ethiopia which has been the source of many disputes.

Its northeastern and eastern parts have an extensive coastline along the Red Sea.

Apart from this, it boasts rich wildlife and many rare species, but what attracts tourists to this country is the breathtaking scenery at the outskirts of the country.

You can also enjoy its capital as Asmara today is the so-called poster capital for cleanness, tranquility and architectural style.

If you venture to Asmara right away, you will end up truly in awe of its architecture, public buildings, villas and mansions of Art Deco.

Just watching the design of the buildings in Asmara and its charming facades is enough of an experience to make you want to visit this gorgeous city.

Many of them look like sailing ships and monuments.

If this isn’t your cup of tea, keep in mind that you can always go hiking, rock climbing and mountain biking outside of Asmara.

Overall, Eritrea is safe to visit if you avoid some parts of the country. Still exercise caution as petty and violent crimes do exist although they aren't too common.

As for transport, it is generally safe, though Asmara is situated on a plateau and the roads that lead to it are steep, curving, and narrow, and mostly in poor condition, commonly littered with rocks and debris. Driving in Eritrea is tricky as their drivers are reckless, road signs non-existent and roads frequently in bad condition.

Pickpocketing exists in Eritrea, like in any country but it is not too big of an issue. There are specific areas like crowded places and places frequented by tourists where pickpockets operate and, of course, the public transport that is notorious for pickpockets. Be careful and keep your valuables close by your side.

Eritrea is commonly hit by natural disasters like flooding, earthquakes and volcanic activity, while every three to five years, it also suffers a drought that destroys all the crops, kills livestock and causes considerable material damage.

Violent crimes aren't an issue in Eritrea. You can relax and walk around Eritrea carefree and not think about crime. Still, avoid dark streets and remote areas that you wouldn't go into even in your own country.

Even though there haven't been any terrorist attacks in Eritrea's recent history, they shouldn't be ruled out, be aware of your surroundings at all times. Always keep in mind the areas of the country that should be avoided, namely, anywhere near the border with Ethiopia.

There is the issue of scams in Eritrea, but it isn't any bigger of an issue than in any other country. Always negotiate everything in advance, double check your change and never pay anything upfront. Never accept drinks from strange people or leave your drink unattended.

Women are relatively safe in this country. If you are a woman planning to visit Eritrea, just avoid all the parts of the country that are dangerous for anyone else to visit, and you should be fine. Also, after dark, avoid dark and deserted areas.

So... How Safe Is Eritrea Really?

Generally speaking, Eritrea is a safe country to visit if you avoid some parts of it.

For example, its capital Asmara is a very active city, and in the downtown area of Asmara, you can walk around normally, from morning until midnight.

Just avoid isolated and deserted areas, as you might run into gangs, intoxicated people or muggers.

Apart from this, Asmara is considered safer than many European capital cities.

However, even though Asmara does not have the same level of street crime as other cities travelers are advised to exercise caution as there have been dozens of reports of westerners being attacked, robbed, mugged or injured in some way.

Petty crimes are also extremely active in shopping areas and around tourists landmarks, so keep your wallets/purses close to the body.

Be careful in all crowded areas like bus stops, stadiums, movie theatres, market places, and even places of worship.

Avoid roaming around late at night as there have been reports of Eritreans and Westerners being assaulted and robbed while doing so.

The main cause of concern for all tourists visiting Eritrea, are the forbidden areas where you shouldn’t go under any circumstance.

Around the border with Ethiopia, there are military forces from both countries that remain strong along the border areas and crossing between the two is not allowed.

Keep in mind that you should stay at least 25 km away from the Ethiopian border and the Southern Red Sea region, including the port of Assab.

The town of Barentu is also best avoided.

How Does Eritrea Compare?