How Much Does It Cost to Live In Cincinnati, OH?

The cost of living in this city is very affordable, depending on the neighborhood, but mostly everything is less expensive than the national average. It’s a great place to save money.

Namely, there are more than 100 neighborhoods and, for the most part, where you live will greatly influence how you feel about living here.

The food is pretty good here and cheaper than in most other US major cities. Cincinnati is a city known for chili and you can find a bunch of restaurants where you can get delicious chili and they’re mostly inexpensive. There are also some upscale places like Orchids at Palm Court and Boca as well as many other hidden gems: it’s not all chili and spaghetti.

The major supermarket chains in Cincinnati are the regular ones: Kroger (throughout Cincinnati and don’t forget to ask for a discount card), Aldi, Meijer, Whole Foods Market, Jungle Jim’s and Trader Joe’s. You’ll also find three largest discount store chains: Walmart, Target, and Kmart that have several stores in Cincinnati as well.

The main form of public transportation in Cincinnati is by bus, but if you want to get anywhere quickly and conveniently, you will need a car. Parking is generally cheap Cincinnati which is a great circumstance if you own a car, and besides – you can drive most places in the city in 20 minutes. There isn’t a subway but the buses are good and cheap.

Utilities are not too expensive in Cincinnati, if you look at the price of all included utilities for an apartment of a larger structure (85m2): for such an apartment, all basic utilities – including electricity, along with heating and cooling, water, gas and garbage services – costs around 130$. Internet is pretty pricey though, amounting up to 55$.

If you like biking around a tough terrain, Cincinnati offers a lots of hills, so you can actually save a lot of money by exercising outside. But if you prefer exercising indoors, becoming a member of a gym or a fitness club will cost you only around 25$ a month. Going to the cinema costs nearly the same as it does in most popular European destinations – around 10$ per ticket.

Cincinnati has 52 neighborhoods, and each one has its own shopping districts so wherever you are, you can go shopping nearby. Like everything else, the prices of clothing in Cincinnati are lower, too. For example, a pair of quality jeans like Levi’s costs around 45$, a pair of quality running sneakers like Nike are around 67$, while simpler items of clothing like shirts cost around 30$.

Again, like most things, rent is cheaper in Cincinnati than in most other cities, but it all depends on where you want to rent.If you want to live in the center of Cincinnati, the apartment will cost you around 1000$ but if you want to cut your expenses you can find a charming little apartment on the outskirts of city for around 680$.

How Does the Average Person Spend Their Money in Cincinnati, OH?

Apart from food and rent, people spend a lot of money on transportation and restaurants – since there are many people who are used to eating all three meals in restaurants.

Utilities are also a considerable expense for an average person living in Cincinnati.

In Cincinnati, there’s a variety of white collar and blue collar jobs available and there’s a relatively low level of unemployment here compared to other areas of the country.

However, it’s still not a major scene for emerging businesses and the biggest companies are P&G, GE, and some others in insurance and banking.

Minimum wage in Cincinnati is around 1400$ – and though the prices are higher in the US too, this is still a reasonable amount of money that just goes in line with the high standard of living here.

Though it certainly isn’t the most expensive place to be, people in Cincinnati are certain there’s room for improvement.

What About Travel Safety in Cincinnati, OH? 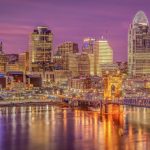 Cost of Living by City in Cincinnati, OH