How Much Does It Cost to Live In Seattle, WA?

Seattle, a city located in Washington, is the largest city in the Pacific Northwest.

It is often nicknamed The Emerald City, considered America’s green gem, because it is so rich in nature and offers an abundance of evergreen trees throughout the entire city.

Seattle can be a very expensive city to live in, and there’s a lot to do there

Quite a few high tech companies keep expanding their presences into the great Seattle area in recent years, which up until now created tens of thousands highly paid jobs in Seattle area.

Seattle is a huge city and with a huge city comes a huge range of restaurants and eateries. There are high-end restaurants that cost a lot and some cheaper ones where you can have a delicious meal for around 15$. If you’re really on a tight budget, you can eat in any of the chain fast food restaurants.

The major supermarket chains in Seattle are Safeway and Albertsons. Dozens of farmer markets are scattered around the region, with many active only in the summer months. The Pike Place Market in Downtown is an attraction by itself, known for its seafood and produce stands.

Public transport is well organized in Seattle, since it’s a huge and busy city. During rush hours adult bus fares are 2.75$ within the city limits. All other times of day and weekends adult bus fare is 2.50$. The fare for children is always 1.50$. A monthly pass for public transport in considerably higher than in most cities, costing around 100$.

Depending on the size of your apartment, monthly utilities, including heating, cooling, electricity and gas could cost between 100$ and 250$ a month. However, for an apartment of about 85m2, your bills would amount up to 155$. Internet is expensive as well, amounting up to around 65$ a month.

There are places to hike and lots of nice short trails all over Seattle, so you won’t have to spend a bunch of money on gyms or fitness clubs. Though the city is not necessarily bike-friendly, you can go further away from the center and enjoy the nature there. If you prefer indoor spaces, a gym membership will probably cost you around 50$ a month which is very reasonable according to US standards.

Downtown in general is the retail core of downtown offering a huge number of hotels, boutique shops, department stores (Nordstroms & Macys). If you’re set on shopping for clothing and shoes, just go into any of those stores. The prices are relatively low – quality jeans cost around 50$. Quality sneakers are more expensive, standing at around 80$.

Rents are incredibly high for the type of area. Additionally, the better suburbs around the city come with higher price tags then you might see in other suburbs. Rent is skyrocketing beyond what most working people can afford. For example, 2000$ for a single bedroom near downtown is very good.

How Does the Average Person Spend Their Money in Seattle, WA?

No surprises here: the biggest chunk of the paycheck of Seattle’s citizens gets spent on rent.

Rent will be your problem when it comes to finances, since they’re definitely the main financial burden for the people of Seattle.

As already mentioned, with more than 40% of one’s income being spent on rent, it can easily be said that it is skyrocketing beyond what most working people can afford.

The next biggest expense for the people of Seattle are food and groceries.

What is also high is the percentage of restaurant expenses: namely as much as 11% of one’s entire salary gets spent on restaurants.

Quite a few high tech companies have expanded their presences into the great Seattle area in recent years, which created tens of thousands highly paid jobs in Seattle area.

With an average wage reaching far and beyond 4600$, citizens of Seattle have enough money to cover all their expenses, afford most of the things they want and need, and still live comfortably.

Of course, those that are renting have a harder time since they’re spending a lot more money.

What About Travel Safety in Seattle, WA? 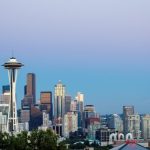 Cost of Living by City in Seattle, WA