How Much Does It Cost to Live In South Korea?

South Korea, officially referred to as the Republic of Korea is a gorgeous country in East Asia.

Korea is a fairly expensive country compared to most Asian countries, yet less expensive than Japan.

Still, if you look at other fully modern, developed, countries that South Korea strives to be, it is actually on the cheaper side.

Seoul has been particularly expensive during the recent years due to high real estate values (some say, even more so than Tokyo) but this has calmed down since the 2008 financial crisis in the country.

Going hungry in South Korea is quite a task. Everywhere you turn, there is always a place to eat. Food is another major factor in the cost of living in Seoul and will usually be your biggest expense, and if not – then the second biggest for sure. If you prefer to eat cheaply but want to eat out then it is more than possible to find delicious meals for around 6$.

As for foods, if you cook yourself, it will be considerably cheaper for you. You can buy groceries in large quantities (it’s easy, just buy through any grocery online shop, and they will send them to your door. Another option for fresh produce, is buying them at open markets where you’ll find a variety of colorful fruit and vegetables.

Public transport will be your next biggest cost. Train rides and bus rides are around 1$ each way, and this means that you can expect to spend around 2$ for every trip. If travelling through any of the big cities, especially Seoul, driving is not recommended: the roads will be crammed with traffic jams. Taxis are convenient, although pricey but they are sometimes the only practical way of reaching a place.

Utilities are definitely expensive for this country’s standards. If you’re living in an apartment that is on a larger side, like 85m2, you will be expected to pay somewhere around 150$ a month. Internet and phone plan prices in South Korea vary greatly depending on what you are expecting. The Internet can be as had as low as 30$ a month (100mbps) and as high as 50$ (1gbps).

Practicing sports or enjoying yourself some gym or fitness time will be relatively expensive wherever you go. In South Korea, at least, they’re not robbing you blind – it’s somewhere around 60$. If you want to go to a cinema, a ticket for one seat costs around 8$ which is very expensive.

Keeping up with the latest trends, shoppers and boutique owners alike keep cramming the streets and markets every weekend and you can find everything you need here. Shopping for clothing, however, isn’t cheap. Sure, you can find quality jeans like Levi’s that cost less than 60$, yet in comparison to that, a simple shirt costing more than 40$ is definitely expensive. Quality sneakers cost a bit above 85$.

One might argue that rent is definitely expensive here, especially if you’d like to rent somewhere in the city, but the truth is that the standard of living is so high in South Korea that people can afford this. It might be cheaper to look at the apartments outside of city centers, where you would pay less than 400$ for a one-bedroom apartment.

How Does the Average Person Spend Their Money in South Korea?

The peculiar thing about South Korea, when it comes to spending money, is that one of the highest percentages of money spent on food is precisely in this country.

As much as 45.4% of one’s entire income gets spent on food – that’s almost half one’s salary!

Rent is, however, the next on the list of expenses, and it’s no wonder since they are really high for the general standard of the country.

Transportation is somewhat pricey which makes it third on the list of most common expenses in South Korea since it has to be paid and is an everyday necessity for all citizens wanting to get to work on time.

South Korea is a country with an exceptionally high standard.

Apart from offering very high salaries and even minimum wages, it’s also the country of many career opportunities, offering jobs with good perspectives.

Average monthly net salary is a whopping 2300$, so those who earn that much money can afford everything from basics, to traveling, vacations and have a little left on the side to save up.

What About Travel Safety in South Korea? 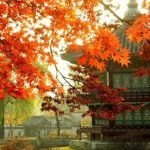 Cost of Living by City in South Korea