How Much Does It Cost to Live In South Africa?

South Africa is a country located at the southern tip of Africa.

It is a developing country and yet, it still has a high standard – higher even than in some European countries.

Cost of living is low, achieving a good, healthy lifestyle is easy, and provided you pay for private household security (which is relatively cheap) and keep your wits around you, it is safe

Even though South Africa has had many struggles that never seem to end, you will find many different perspectives on this country and a lot of it depends on your attitude.

In South Africa, for tourists even the restaurants shouldn’t represent a huge luxury: a meal in an inexpensive one costs around 8$ and you can even eat at a mid-range restaurant for 30$ – for you and your friend! But if you’re looking to keep your cost of living down, stick to the restaurants where locals go to. South Africa has a well established wine industry so be sure to try their wines.

Major supermarket chains include Checkers, Pick n Pay, Shoprite, Spar, and Woolworths Food. Supermarkets tend to feature primarily South African and African brands, so there’s a smaller number of American and Asian foods. Everything is very cheap though, so you should have no problem cooking at home and saving a lot of money by eating in.

Like many other developing countries, South Africa is not a good place to try the local urban mass transport systems. The buses can be dangerous, unreliable and badly organized. Your better option is to rent a car, take a taxi, or take an escorted tour. Public transport isn’t that cheap either, with a one-way ticket costing well above 1$.

Utilities, for an apartment of a normal size (of about 85m2) are just above 80$, including electricity, heating, cooling and water. Cell phone services are considerably lower than in many countries, while high-speed internet can get a bit pricey, varying along the lines of 66$ per month.

As expected, you will have to cash out a bit more money if you want to indulge in sports and fitness activities and pass your time this way. However, in South Africa, these are reasonable prices, and most tourists interested in sports will be able to pay for fitness centers that cost about 35$ a month.

You can go shopping in South Africa alright! Though prices in shops are fixed, the prices in open markets or from street vendors are open to haggle. South African malls also tend to feature primarily local boutiques and local chains, with some European, Asian, and American boutiques. You can buy quality jeans like Levi’s for around 52$ and a pair of running sneakers for 85$.

Like in most countries, living and renting apartments, studios or houses depends on the particular city, neighborhood and the type of living facility you’re renting. You can expect an apartment for one or two people in the city center to cost up to 440$, while apartments for larger families can cost twice as much and more, depending on the area where you’re renting.

How Does the Average Person Spend Their Money in South Africa?

Taking into consideration the statistics provided, it can be said that people in South Africa spend most their money in supermarkets and markets, buying food and necessities.

They also spend a lot of money covering their rent expenses and utilities, which is normal, considering that these are things that need to be paid.

In South Africa, people also spend a lot of money on transportation, and considering the fact that cities in this country are extremely large and spacious, this is also to be expected.

At the moment South Africa has an extremely volatile and unpredictable economy and the amount of corruption and switches in the cabinet hasn’t helped any South African pocket.

South Africa is one of the best developed African countries and still expanding.

This is why the salaries in South Africa are very high, especially in comparison to other countries in Africa.

The average monthly net salary is around 1100$, which is really high, but there’s a huge gap between an average salary in this country and its minimum wage.

Namely, the minimum wage in South Africa is 290$ and that is nowhere near enough to cover all the basics.

What About Travel Safety in South Africa? 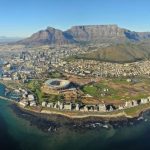 Cost of Living by City in South Africa