How Much Does It Cost to Live In Armenia?

When people think about moving to another country, Armenia might come to their minds and they might ask how much it costs to live there.

This mostly depends on your lifestyle and where you want to live, but most people would say that it is an unbelievably cheap country.

On average, it can be said that living expenses are significantly lower if compared to other cities.

Armenia has to offer a lot, with an incredibly low cost of living in a prosperous country, but only if you live a modest life.

Armenia : Cost of Living by City

People interested in eating out will be glad to hear that a meal at a restaurant can cost under $8 and the juices, domestic beers, and wines are also extremely inexpensive as well.

Living in Armenia and eating daily in restaurants is not very hard for tourists, as the prices are quite reasonable compared to the prices in Europe or America.

Fruit and vegetable lovers would feel satisfied to hear that the prices are so low that the cost of food at the local markets is almost negligible.

When you have a job, the prices at the local markets are based on to the average salary of the workers and they are rather cheap so that everyone can afford food for their families.

Armenia is a country where you can live well even though you do not have much money.

Public transport is very inexpensive and every person can afford it.

Gasoline is also rather cheap in Armenia so you can afford to drive there, too, especially if you are earning your wage out of the country.

Unlike food, utilities and the Internet are not cheap in Armenia.

You have to spare at least $104 a month for basic utilities, such as heating, water, and electricity, and they are necessary.

On the other hand, Armenia has very clean and rather inexpensive phone lines.

Sports people would not feel extremely satisfied with the fact that the fitness club’s monthly fee is rather high and compared to minimum wages, it can be considered excessive.

It is noticeable that amusement and leisure are considered luxuries in Armenia, so the prices are too high, but people still find ways to have fun.

Life in Armenia is cheaper compared to some developed countries.

However, the prices of clothing and shoes are considered rather high in relation to the minimum wage.

If you earn $160 per month, it would be difficult to afford a pair of Nike running shoes which will take you half of your salary.

Living out of the center would be much more affordable as the costs can easily be cut down by half or more in comparison to the city centers.

If you decide not to spend so much money on rent, you can live cheaply outside of the capital.

On the other hand, the rent for a very spacious apartment in the center of the capital city Yerevan costs approximately $954, which again is not expensive if you get a salary from another country.

How Does the Average Person Spend Their Money in Armenia?

Armenia has much to offer anyone for very little money.

The cost of survival in this country is particularly based on rent and markets and they take the greatest amount of income.

In all the other spheres, money is almost equally spent, meaning that people in Armenia devote money to their amusement at restaurants, sports, and utilities as well.

Clothing is not of such great importance to them, so they spend the least money on it if they have something left after all the obligatory expenses are paid.

In comparison to the minimum wage, it is noticeable that utilities cost a lot, and renting an apartment can take almost the whole wage.

There is a huge difference between the cities and rural areas when the prices of rent are in question, so those with lower salaries decide to live out of the city.

Still, they manage to survive and represent their country as a prosperous one.

Armenia is heaven for foreigners in terms of low and affordable prices, but that is not the case with its residents.

What About Travel Safety in Armenia? 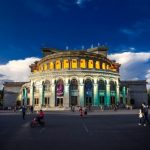 Cost of Living by City in Armenia