How Much Does It Cost to Live In Buenos Aires?

As in any other city in the world, it is almost impossible to give average prices for the costs of living but Buenos Aires belongs to the group of the cheapest major cities to live in the world.

In each country life outside of the city center is definitely cheaper and more affordable than living in the central areas of huge cities.

How you would feel in Buenos Aires depends on what lifestyle you live and those people who lead a modest life can do very well there, unlike those posh ones for whom the average salary would not be enough to cover all the expenses.

Argentina : Cost of Living by City

Cost of Living in Argentina

Once you come to Buenos Aires to live from some other county which has higher living standards, prices in restaurants can be very reasonable and for some people even inexpensive.

However, the meals in local restaurants can be quite high for the locals who do not earn much.

As in many other countries in South America, the price of bread is pretty high in comparison to Europe.

For foreigners, food in Buenos Aires is a bargain and they are amazed with the fact that they get great food at amazingly low prices.

It is still more affordable making your own meals than daily eating in a restaurant.

No matter whether you will be using trains, trams or buses, there are many ways to get around Buenos Aires and public transport is the most affordable one, even though it is often very crowded.

Vehicles tend to be expensive and for the locals it is extremely difficult to save enough money to buy one.

Living in the biggest city would definitely cost you more than living in the countryside, not only due to the higher renting costs, but the price of utilities there.

Basic utilities, such as heating, electricity and water, requires a lot of money, but still Buenos Aires belongs to the cities with the lowest monthly utility costs in Latin America.

Due to the fact that rent takes much of monthly salary and utilities and food also require quite a lot of money, there is not much left for other activities, such as sports and leisures.

However, those who earn more can afford fitness clubs at the price of $32 per month.

Buying clothes in Buenos Aires is not quite a gorgeous experience.

Prices are unreasonable as the shoes and jeans cost an incredible amount of money.

In comparison to the monthly wages, it can be said that Argentina is not so affordable when it comes to shopping for clothes.

Buenos Aires does not differ much from other major cities when it comes to the price of a rent.

Apartments outside of the central areas of the city are much cheaper than those in the city center.

However, in comparison with the minimum wages, the price of a rent is rather high and takes more than half of the wage.

How Does the Average Person Spend Their Money in Buenos Aires?

Housing, food and transportation are very affordable in Buenos Aires, especially for those who get their salaries from other countries.

They will be able to rent a one bedroom apartment, pay utilities and food, use public transport and even have some money left for sports and entertainment.

On the other hand, Argentinians spend their on food and rent as they are obligatory and necessary.

If they have additional money, they give it for transportation and restaurants.

Clothing and sports are the least important and money is spent on them only after the costs of utmost importance are paid.

Whether you will lead a normal life or barely survive in Buenos Aires, it all depends on the quality of life you lead.

You can either live cheap or you can spend a lot of money on the rent, as basic apartment is not the same for all people and the quality of food entails variety in prices.

In Buenos Aires, minimum wage is almost equal to the average monthly net salary and most of it goes for the rent.

Mortgage interest rates there are slightly higher and apartments and cars are rarely bought.

What About Travel Safety in Buenos Aires? 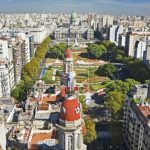