How Much Does It Cost to Live In Philippines?

The Philippines, officially known as the Republic of the Philippines is an archipelago country in Southeast Asia.

Generally speaking, the Philippines is a developing country so the cost of living is not too high.

Your own, personal, cost of living in this country depends on what kind of lifestyle you want to have, and what kind of a job you have.

The least amount that a person can be comfortable with is 600$ or so, and for a couple 900$ will be sufficient.

Eating out is definitely more expensive than cooking at home, but the Philippines offer some great cooking – and not as expensive as you would expected. Of course, there are many high-end fancy restaurants and they’re not cheap, but you can also eat at an inexpensive restaurant for less than 3$ and have a dinner for two at a mid-range restaurant for only about 14$.

Cooking at home is cheaper probably by 40 to 50% than eating outside. You can shop at many supermarkets or the Robinsons mall and if you really want to splurge, you’ll need around 500$ a month. There are also small bakeries in the neighborhood which sell cheap breads and the sari-sari stores (variety stores) where you can buy goods in smaller packages.

Transportation isn’t the best in the Philippines. You can use Grab Car or Uber, and keep in mind that if you use a normal taxi in Manila you might get ripped off. Jeepneys are the cheapest way to get around and could significantly decrease your transportation costs. Transportation is, in general, very cheap though. A monthly pass for public transport costs around 9$.

Utilities are just ridiculously expensive in the Philippines. You can easily spend around 100$ per month. That would include using air conditioner around eight hours per day. Purely lights, gadget charging, TV and hot water in an apartment of around 85m2 will cost you over 100$. Water bill is around 5$ per month.

Cities in the Philippines are filled with cinemas, theaters and other leisure opportunities, and a ticket for a movie in a cinema will cost you around 5$. Indulging in sports and fitness is more expensive, like in most countries. If you want a gym or a fitness club membership, it will amount up to around 30$.

Major cities like Manila are literally brimming with large malls that are just waiting for you. They also offer great shopping opportunities since the prices are pretty low. For example, you can buy Levi’s jeans for around 35$, while a pair of running shoes of brands like Nike cost around 70$. Lighter pieces of clothing like shirts and summer dresses are around 20$.

Rent for an apartment is at least 100$ per month around the city. But if you are alone, you might prefer to stay in a boarding house or lodging house. Depending on the part of the city, you can find an apartment for 100$, or for 250$ – if you have your mind set on living in the city center. For a larger apartment for the whole family, you’ll have to pay at least 300$.

How Does the Average Person Spend Their Money in Philippines?

An average person in the Philippines definitely spends the biggest amount of money on food – which is no wonder, considering that most world countries follow that pattern.

The next biggest expense is definitely rent, but it’s not too far from the expenses for transportation, which means that rent isn’t really that expensive in the Philippines.

Interestingly enough, the Philippines are rare in the sense that utilities draw more money from the people than eating in restaurants, which is not common at all.

As for the salaries, they aren’t the highest in the Philippines – far from it!

Even though the prices are pretty low, the salaries are also very low, which makes it impossible for people to comfortably cover all their expenses and not worry about tomorrow.

What testifies to that is the minimum wage in the Philippines which is only around 180$.

Average monthly net salary in the Philippines is double the amount – around 300$, but it is still not enough to live a comfortable life in this country.

What About Travel Safety in Philippines? 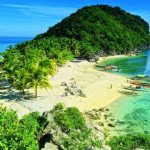 Cost of Living by City in Philippines