How Much Does It Cost to Live In Manila?

Manila is the capital of the Philippines and the country’s center of education, business, and transportation.

Metro Manila is the most populous metropolitan region.

It is composed out of the city of Manila and surrounding cities like Makati, Mandaluyong, Quezon City and Taguig.

Your own, personal, cost of living in this country depends on what kind of lifestyle you want to have, and what kind of a job you have.

However, the situation is such that only a fraction of the city’s population are able to enjoy the best things the city has to offer.

Cost of Living in Philippines

If you’re eager to try some local food at Manila’s many restaurants, you can find good restaurants catering to international tastes. Street food is also popular but many say that it’s not as good as in places like Bangkok, Ho Chi Minh, Shibuya or Singapore. Of course, there are many high-end fancy restaurants and they’re not cheap, but you can also eat at an inexpensive restaurant for less than 5$.

Cooking at home is cheaper probably by 40 to 50% than eating outside. You can shop at many supermarkets or the Robinsons mall and if you really want to splurge, you’ll need around 500$ a month. There are also small bakeries in the neighborhood which sell cheap breads and the sari-sari stores (variety stores) where you can buy goods in smaller packages.

There are various methods of transportation available. Taxis are quite common in the business districts. Buses are everywhere. There are also Jeepneys, which operate fixed routes like buses and usually have very cheap fares. You can rent a car and generally rental cars come with drivers. There is a light rail system but it’s not comprehensive. It only goes down a few of the main roads.

Utilities are just ridiculously expensive in Manila. You can easily spend around 100$ per month. That would include using air conditioner around eight hours per day. Purely lights, gadget charging, TV and hot water in an apartment of around 85m2 will cost you over 130$. Water bill is around 5$ per month. These days electricity is very reliable. In the mid 90’s brownouts were very common but these days brownouts are very rare.

Manila, as the capital of this huge country, is literally filled with cinemas, theaters and other leisure opportunities, and a ticket for a movie in a cinema will cost you around 5$. Indulging in sports and fitness is more expensive, like in most countries. If you want a gym or a fitness club membership, it will amount up to around 40$ (much more than what is considered to be the country’s average).

Major cities like Manila are literally brimming with large malls. Malls are everywhere. Every few years it seems as though a gigantic new mall is built, rivaling the last gigantic mall. They also offer great shopping opportunities since the prices are somewhat low. For example, you can buy Levi’s jeans for around 40$, while a pair of running shoes of brands like Nike cost around 70$. Lighter pieces of clothing like shirts and summer dresses are around 20$.

Rent for an apartment is much higher in Manila than most other places in the Philippines. But if you are alone, you might prefer to stay in a boarding house or lodging house. Depending on the part of the city, you can find an apartment for 200$, or for 500$ – if you have your mind set on living in the city center. For a larger apartment for the whole family, you’ll have to pay at least 1500$.

How Does the Average Person Spend Their Money in Manila?

An average person in the Philippines spends almost the same amount of money on both food and rent – which is no wonder, considering that in Manila, rent is far more expensive than anywhere else in the Philippines.

Food is the biggest expense for most countries and cities, around the world.

Interestingly enough, the capital of the Philippines – as well as other cities in the country – is rare in the sense that utilities draw more money from the people than eating in restaurants, which is not common at all.

Despite the high prices in this city, the standard of living is not high at all.

Poverty is very visible and heartbreaking. During any drive around town, you can always see street children begging or selling items on the road.

As for the salaries, they aren’t high here in the capital – far from it!

Average monthly net salary in Manila is relatively high for the Philippine standards, but it’s not as high as it can go.

It is around 400$, but it is still not enough to live a comfortable life in this country.

Minimum wage in Manila is only around 180$.

What About Travel Safety in Manila? 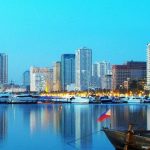 Cost of Living by City in Manila