How Much Does It Cost to Live In Makati?

Makati is located in the heart of big Metro Manila and is known for its upscale shopping malls, restaurants, hotels and prominent and rich population.

Makati is considered the financial, commercial and economic hub.

It is where the Philippine Stock Exchange (PSE) is located, and where large multinational corporations are usually situated.

Financially, it is more expensive than other, smaller cities of the Philippines.

However, that’s not to say you can’t live in Makati within a decent budget – just be smart with your money, and you’ll have no problem living on a limited budget here.

Cost of Living in Philippines

There are several parts of the city in Makati. The prices go up starting from the area known as Greenbelt 1, which is full of fast food joints and lower-end stores, where you can eat for under 3$. Greenbelt 5 is hosting the most expensive restaurants and shops. Any restaurant or food joint in Greenbelt 3 onward is, well – moving towards Western prices, which are bordering on being affordable, especially if you have an average salary here in the Philippines.

When in doubt about your budget – COOK! The best advice is to get out of Greenbelt for grocery shopping, and go to stores such as Cash & Carry, or to SM Hypermart, which is a 20 minute walk from Greenbelt. If you don’t mind spending money on groceries, the best thing to do is go to the main Rustan’s supermarket. If you shop there every few weeks, your bill for groceries will move between 50$ – 90$ roughly, each time.

Most residents of Makati use taxis here since the area is pretty large but the safest way to do this is to use cab applications such as GrabTaxi and Uber, since there are many scary stories involving taxi drivers. Public transport can be used though, like in other cities of the Philippines, including jeepneys – the cheapest way to get around.

Though utilities are ridiculously expensive in the Philippines, this doesn’t apply to Makati. While in Manila you can easily spend around 100$ per month, here the prices are much lower. Utilities including lights, gadget charging, TV and hot water in an apartment of around 85m2 will cost you around 60$. Water bill is around 5$ per month.

Practicing sports and fitness activities, however, are through the roof here in Makati. This is probably due to the fact that it’s a posh area and the majority of people opt for such activities practiced in – well, posh facilities. If you want a gym or a fitness club membership, it will amount up to almost 75$.

This is city is actually known for its upscale shopping malls that are home to high fashion brands, so, in accordance with that – the prices of clothing and shoes are higher than in most cities of the country. To paint you a picture: you can buy Levi’s jeans for around 55$ (while in some other cities they cost half as much), while a pair of running shoes of brands like Nike cost around 70$.

Rent is more expensive than the country’s average – which isn’t a surprise. Depending on the part of the city, you can find an apartment costing around 350$ – that’s if you don’t mind living outside of the city. However, if you have your mind set on living in the city center you’ll have to pay at least 730$. For a larger apartment for the whole family, you’ll have to pay at least 2000$.

How Does the Average Person Spend Their Money in Makati?

An average person in Makati definitely spends the biggest amount of money on food – no wonder, really, considering that this is true for most cities of the world.

The next biggest expense is definitely rent, which, in this city is very high, just like everything else.

Interestingly enough, Makati – like most other cities in the Philippines, is special in the sense that utilities draw more money from the people than eating in restaurants, which is especially peculiar for a city that’s known for expensive restaurants.

The good thing about Makati is that it’s special in comparison to other cities in the Philippines – when it comes to salaries.

It is also a city brimming with corporations and companies so you can find jobs in almost any industry you want especially in BPO (Business Process Outsourcing), IT and others.

That being said, the salaries here are three times higher than in most other cities of the country: an average monthly net salary in Makati is around 700$.

With that kind of income, you can easily cut some unnecessary expenses like going to the gym or eating in restaurants, and you can live a comfortable life.

What About Travel Safety in Makati? 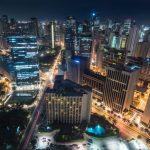 Cost of Living by City in Makati