How Much Does It Cost to Live In Melbourne?

Being at the 58th position of the most expensive places to live in the world, it can be noted that Melbourne is a more affordable destination than many other cities around the globe.

How much money you would need highly depends on your lifestyle and there are various opportunities which allow you to have a good time and not spend too much money in the city.

You can save a lot if you do not waste money on non-essential things, which are rather expensive in Melbourne.

Australia : Cost of Living by City

Cost of Living in Australia

Once you get to Melbourne, you would like to try some of their local food and that can be done in one of their fine dining restaurants.

Melbourne has to offer some great places to eat out, which would not be too expensive and still would serve a delicious food.

However, if you take a bottle of beer after the meal, do not get astonished if it cost you half of the meal price.

Even though they earn a lot, Australians tend to buy their food at the local markets and stores, where the foodstuff prices are pretty lower.

In Melbourne, you can find great fresh products at lower prices if you decide to visit the markets.

This can be the best solution if you possess a not so high budget.

In comparison to some other major cities in Australia, Melbourne public transportation prices are higher.

It is true that the transport is functional and organized, and maybe the best option to commute through the city, but you will need to separate more than $100 per month just for it.

Besides getting the apartment here and earning enough money to pay the high rent price, you need to think about paying utilities as well.

Services in Melbourne are not inexpensive, and more than $200 per month needs to be given for the basic utilities, such as water, electricity and the Internet.

Unlike some other cities in Australia, where tennis court rent is not so high, the situation is a bit different in Melbourne.

One hour of tennis is almost equally paid as the cinema ticket.

Entertainment is pretty expensive in Melbourne, while fitness pass price is not too high compared to the living conditions.

Among major cities in Australia, Melbourne is the one with the highest living standards and buying clothes here is affordable only for those with earnings above average.

Designer clothes cannot be found at reasonable prices, but that can be attributed to high salaries and quite a lot of tourists.

The average rent for an apartment in Melbourne is around $1,360.

You can find less expensive apartments outside of Melbourne, away from the city center and the rent for them would be approximately $1000 a month.

If you are coming with a family, then a three bedroom apartment will cost you quite a lot.

How Does the Average Person Spend Their Money in Melbourne?

According to the data, Australians, as well as other nations living there, has to separate quite a lot of money for rent, and it takes much of their monthly salary.

Besides that, they need to pay for food, so markets and stores take almost 30% of their wage.

Pretty less money is spent on restaurants and transportation.

It is interesting that people give almost equal amount of money for sports and utilities.

Again, clothes are expensive and they are bought only if the budget allows it.

A person who earns the average monthly net salary in Melbourne will have enough money to cover all the expenses and afford some leisure and entertainment there.

However, the minimum wage earners will not be able to enjoy much.

And if they have a family, the money for restaurants or cinemas would not remain, as the rent would take almost all of their monthly wage.

If you are planning to earn in some other country and live in Melbourne, pay attention whether you will get enough to satisfy the high standard of living there.

What About Travel Safety in Melbourne? 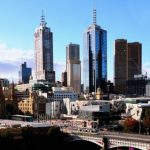 Cost of Living by City in Melbourne