How Much Does It Cost to Live In Haifa?

The cost of living and real estate in Haifa are far more affordable than most other major cities in Israel, especially Tel Aviv.

Generally, as everywhere, the cost of living really depends a lot on your lifestyle and what your priorities are – and therefore what you can save.

The most expensive item in Haifa, as in the rest of Israel, is the rent, while everything else is pretty reasonable.

And given that Haifa is a big hub in the north, it offers more job opportunities with meaningful career perspective.

Israel : Cost of Living by City

Cost of Living in Israel

If you’re smart about your money, you can save up a huge amount. A good piece of advice when eating out is that you never order a bottled water. Tap water is safe and drinkable; everyone drinks it. No need to waste money on bottled water. You should also know that lunch/dinner prices are pretty much the same, and Haifa offers a variety of cute little restaurants.

Buying food in a grocery store or a market is the best way to enjoy a variety of healthy groceries. Fresh veggies and fruit are always there at a low price, and you can also find cold cuts, a variety of cheeses and even ready made food like roasted chicken that costs much less than in a restaurant.

Generally, though it is expensive, it is very easy to get around using public transport, without knowing a word of Hebrew. However, keep in mind that public transport is designed to serve the needs of local residents, not tourists, so you won’t find a frequent bus service to wherever you want to go.

Utilities are rather expensive in Haifa, amounting up to almost 200$ a month for basic ones like electricity, water, cooling, heating and garbage services. Internet, however, compared to this and especially compared to other countries, is relatively cheap, costing around 25$ a month. In European countries, it can cost up to 50$.

Practicing sports and leisure in Haifa is anything but cheap. It’s very near the UK standards, so if you want to go to a fitness club in this country, the average is around 60$, while renting a tennis court costs 16$ an hour. Leisure is not cheap either, with cinema tickets costing around 10$ each.

Brand-name clothes usually have the same prices as in Europe which are generally higher than in the US. For example, Levi’s jeans cost about $70-80. As for locally made clothes, the problem for tourists anywhere is finding the good, cheap locations where the locals shop so you have to buy at mass chain stores for prices of around 50$.

Rent is high in Haifa, like in the rest of Israel. In the capital city and tourist destinations it is almost as high as in Ireland (which is infamous for enormously expensive rent). However, it is not as high as it can go in Israel. Average price of rent, for an apartment outside of city center rented by one or two people is around 500$, and for one inside the city center around 600$.

How Does the Average Person Spend Their Money in Haifa?

In Haifa, like in most Israeli cities, the biggest chunk of the paycheck gets spent on food, in markets or grocery stores.

he next huge expense is rent, obviously, due to the fact that, as mentioned, it is ridiculously expensive in this country.

Restaurants take up the next spot on the list, since food can get pretty pricey, and this applies for transportation too.

As usual, the smallest amount of money is spent on clothes and accessories, while sports and leisure take up as much as 6% of all expenses, which is definitely a lot.

Those that get a minimum wage of about 1500$ might have some hard time making ends meet or covering all expenses, which happens more to those that are renting an apartment in Haifa.

However, average monthly net salary is pretty high, though still lower than Israel’s average. Still, an average citizen of Haifa can live comfortably and have no problem earning for a living.

Of course, those renting an apartment will always have a harder time paying off their bills and rent, but generally speaking, Haifa, like other cities in Israel, has a high living standard.

What About Travel Safety in Haifa? 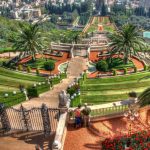 Cost of Living by City in Haifa