How Much Does It Cost to Live In Tel Aviv-Yafo?

Generally speaking, to live alone comfortably in Tel Aviv you would need an income of at least $2300 a month, which is easily accessible if you live an earn your money here.

A roomate/a partner would be the best option because you would split the rent in half, and this is the most expensive aspect of living in Tel Aviv.

Just as a general rule, Tel Aviv is one of the most expensive cities if you take into account entire Europe and its cities, and for Israelis it would be cheaper to go on a vacation somewhere in Europe, including flight costs, than stay in Tel Aviv.

Israel : Cost of Living by City

Cost of Living in Israel

If you’re looking for dinners at real, fancy sit-down restaurants, expect to pay European prices for a nice dinner, rather than American prices which you can probably get only if you eat street food. Tel Aviv has many terrific restaurants for those who really enjoy eating fine food, but don’t expect it to be cheap.

Food in Tel Aviv is so good in restaurants that it would be a shame not to go to one or try at least one dish, but if you’re a fan of cooking and saving up money than supermarkets are definitely for you. Tel Aviv’s markets will offer a vast range of groceries at relatively reasonable prices.

Transportation in Tel Aviv is expensive, but if you have enough money for it, it is easy to get around using public transport, and you don’t even have to speak Hebrew. Though public transport is designed to serve the needs of local residents, not tourists, Tel Aviv has it all covered being one of the main tourist destinations in Israel, so you’ll be able to go anywhere.

Utilities are rather expensive in Tel Aviv, though it’s understandable given it’s one of the most touristy cities in Israel. The utilities there amount up to almost 200$ a month for basic ones like electricity, water, cooling, heating and garbage services. Internet remains relatively cheap compared to this and especially compared to many other countries.

No doubt that spending free time in Tel Aviv is extremely fun, and you’ll want to spend as much of it on the streets of this city. Just bear in mind that leisure activities like going to the movies can cost a small fortune in this cities, like 10$ per person. Also, if you want to join a gym, be prepared to pay up around 70$.

Clothes of famous brands usually have the same prices as in Europe which are generally higher than in the US. For example, Levi’s cost about $70-80. You can buy simpler pieces of clothing like shirts or summer dresses at mass chain stores for prices of around 50$. Quality sneakers are definitely the most expensive.

Always know that the rent in Tel Aviv is going to cost you a lot. This is one of the most popular tourist cities in Israel, and its standards are on par with expensive European cities like Rome or Paris. So, no matter where in Tel Aviv, an exact same apartment would cost you a great deal more than in any other city in Israel.

How Does the Average Person Spend Their Money in Tel Aviv-Yafo?

As expected, the biggest chunk of the paycheck of Tel Aviv’s citizens gets spent on rent, given that in Tel Aviv it can be 50–100% higher than in most Israeli cities.

The next huge expense is food, since the standard is high in Israel, and even though it is cheap compared to restaurants, the groceries can go as high 200$ a week.

Restaurants take up the next spot on the list, since fancy food is a very big part of this city, and the prices are the same for transportation too.

Minimum wage in Israel and Tel Aviv is somewhere around 1500$ which for some might represent a problem, taking into account that rent takes up a huge chunk of people’s salaries, but given the standard, it is manageable.

However, average monthly net salary is pretty high, going well over 2000$ and though people’s expenses are high too, an average citizen of Tel Aviv can live comfortably and relax.

The situation with rent will, however, always be a problem for those that earn less, but generally speaking, one could say that Tel Aviv has a high standard of life.

What About Travel Safety in Tel Aviv-Yafo? 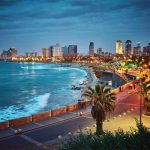 Cost of Living by City in Tel Aviv-Yafo