How Much Does It Cost to Live In Bahrain?

Bahrain is not an expensive country, compared to both European and Australian countries.

While you will have to spend a lot of money on accommodation and utilities, you can save a lot on transportation, food, and clothing.

How much money you will need obviously depends on your lifestyle, but one thing should be taken into consideration – the minimum wage in Bahrain is not enough to cover all the expenses.

Bahrain : Cost of Living by City

Even though restaurants are not cheap, almost 13% of the monthly budget is spent there.

Meals are pretty cheap, as you can eat a well-made dish in an inexpensive restaurant for just $5.

However, alcohol is expensive, where it is allowed to be served, and do not get confused if you are asked to pay $10 for a bottle of beer.

Unlike European countries, where food is quite expensive, the groceries prices in Bahrain are not so unreasonable.

You can always choose to buy food at the local markets or at discounted prices, which will save you a lot.

Preparing your meals is always advisable if you want to afford some other expenses.

It is interesting to notice that public transportation in Bahrain is really inexpensive and can be afforded by anyone.

You can get a monthly pass at a price that is not higher than $40.

If you have your own vehicle, then driving around would not be a great expense, as the gallon of gasoline costs only $0.5.

Compared to European countries, utilities, such as electricity, water, and garbage, are cheaper but still not so inexpensive.

All the basic services would take you approximately $170 per month and when the minimum monthly salary is taken into consideration, this is quite a high expense.

Being considered one of the best places to live in the area, Bahrain is relatively affordable, but when sports are in question, fitness clubs will make a huge hole in your budget, not to speak about tennis court rents, which are more than unaffordable.

When compared to Australian and European countries, the Kingdom of Bahrain is relatively cheap when the clothing prices are involved.

Being able to buy a designer pair of jeans at the price of $50 or even less, should be considered inexpensive.

Still, running shoes are holding higher prices than in other countries.

Besides having to pay utilities, you will first need to find a place to live in Bahrain, and this is definitely the highest expense there.

Those with the average monthly salary will be able to afford an apartment in the city centers, but unfortunately, that would be impossible for the people with the minimum salary.

How Does the Average Person Spend Their Money in Bahrain?

Rental costs for a one-bedroom apartment in the center will be pretty much higher than for the same apartment out of the city center, so those with lower wages should definitely think about renting the cheaper one, so as to be able to save money for other costs.

Food also takes a lot of money and that is why people need to prepare food at home and buy ingredients at the local markets.

People in Bahrain pay attention to their bodies and health, so almost 10% of monthly payments go to sports and fitness activities.

It is worth mentioning that the minimum monthly wage of people in Bahrain is half lower than the average monthly net salary.

This makes living conditions quite difficult and people with so low salaries must be struggling to live normally.

Their rent can be higher than their wage thus leaving nothing for other expenses.

Mortgage interest rate is also higher than in European countries, which makes people unable to afford their own apartments and houses.

What About Travel Safety in Bahrain? 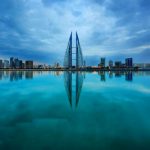 Cost of Living by City in Bahrain