How Much Does It Cost to Live In Osaka?

The cost of living in Osaka, as usual, depends a lot on your living expectations, since everyone has a unique perception of what a decent life means: from type and quantity of food to size and comfort of your living space.

The most expensive thing about Osaka, as usual, is the rents. If you take care of that, other aspects of living there are of pretty decent value.

Many people living in Osaka say that if you can spend only half of your salary for rental, and save the other half for transportation, groceries, recreation and utilities then you’ll probably be able to live comfortably.

Cost of Living in Japan

Restaurants are actually considered very cheap in Osaka. It is the city of excellent food, and you can try meals like Takoyaki, Okonomiyaki, Kushikatsu which are really famous and lip smacking dishes of Osaka for a really low price at many restaurants in this city. A delicious meal like that in a relatively inexpensive restaurant will cost you less than 10$.

The good thing about Osaka is that you can find good deals on meat at markets, cheap Japanese veggies and okay, some very expensive fruit. Japanese supermarkets offer cheap, fresh and versatile products and if you plan on cooking all month, it will cost around 400$ monthly. Cooking your food is much cheaper than eating out in restaurants.

Public transportation is cheap, well organized and abundant, but count on all prices going up at least 30% in Tokyo. Apart from that, another good thing is that most companies bear for your traveling expense. Otherwise, you can estimate it to be around 100$ a month, all depending on your traveling routine.

Utilities aren’t exactly through the roof, but they aren’t cheap either. If you live in a larger apartment of about 85m2, the basic utilities like gas, electricity, heating and cooling will cost you around 150$ which is less than Japan’s average. The price of the bills goes up during winters and summers (heating and cooling affect your wallet greatly).

Enjoying the sports activities is extremely costly in Osaka! A membership in a gym or a fitness club will cost you a whopping 80$! The same goes for having some fun visiting cinema or theaters during your free time: just one cinema ticket costs as much as 16$. An expensive way to have fun, that’s for sure!

Shopping for clothing and shoes, in turn, is much cheaper. If you want to go visit any of the thousands and monumental shopping malls that Japan boasts – that might not be a bad idea. A pair of quality jeans costs around 60$, a summer dress almost half as much, while quality sneakers are somewhere around 70$.

Rent is somewhat high, but for Osaka standards it is not through the roof. However, rent still takes up most of the expenditure. For example, if you’re looking to rent an apartment in the city center, you won’t find one below 800$ and if you want one outside of the city center, it will cost you over 500$.

How Does the Average Person Spend Their Money in Osaka?

An average person living in Osaka spends most of their money on food, the most common situation for the entire world.

The next piece of expenditure is the rent. Compared to many other expensive tourist destinations around the world, the rent in Osaka really isn’t that shockingly high, but it is still considered expensive.

Transportation is the next expense on the table, since everywhere in Japan people absolutely need to use at least one means of transport, and this applies to Osaka too.

An average person also spends more money on sports activities than on utilities.

Though life in Osaka is definitely expensive and at a high standard, so are the citizens’ paychecks and minimum wages.

A minimum wage in Japan amounts to 1200$ which is enough for an average citizen of Japan to make ends meet.

In turn, the average monthly net salary is a bit over 2000$, and that makes it enough money to live comfortably in this city, and having enough to invest in all aspects of life.

Japan’s strong economy and a high standard of life is visible in Osaka, too.

What About Travel Safety in Osaka? 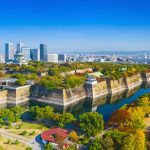 Cost of Living by City in Osaka