How Much Does It Cost to Live In Bratislava?

Bratislava is the capital and largest city in Slovakia.

It is a very pleasant medieval inner city with narrow, winding streets – evoking a romantic, Mediterranean feel when you roam around it.

Bratislava is a decent place to live though you’re not going to get the same experience as many other European capitals would give you. It has it’s own charm.

As for the cost of living in this city – it obviously depends. On an average local salary, you can live fine but you won’t save much, whereas if you’re working for a foreign company you’ll be very free to spend.

Slovakia : Cost of Living by City

Cost of Living in Slovakia

Groceries are not too expensive. However, there have been cases where Slovaks actually crossed the border into Austria to buy groceries as it’s cheaper and the groceries are of a better quality. Ingredients are local, seasonal and cheap and do not cost as much as they do in many other European cities. You can also try shopping for fresh produce in Bratislava’s open markets.

Public transport in Bratislava is better than it looks at first glance. Many buses and trams look rather old (both inside and out). However the actual system is rather extensive and for the most part services are frequent and generally on time. Unlimited use of public transport for the whole city for three months costs around 90$ which is quite reasonable.

Utilities are very expensive, especially in comparison with other European capitals, like Rome. All the basic ones like gas, electricity, heating and cooling, for a larger apartment (if you have a family) of about 85m2, will cost around 200$. Internet, in turn, is very cheap in most households, costing only around 18$.

Bratislava is perfect for outdoorsy types! The High and Low Tatras, Pieniny and Donovaly ranges are places that you can reach any day and are excellent for skiing and snowboarding. You should know that Slovaks actually love to run to the mountains during weekends. However, if you’re more into exercising indoors, a fitness club membership will cost you around 30$.

Bratislava is filled stores, malls and boutiques, like any other European capital – and you can have a great time if you go shopping in this city. In these malls you will find a whole bunch of regular chain stores that exist around the world like Zara, Stradivarius, Bershka, etc.: quality jeans like Levi’s cost around 72$, while running sneakers are around 70$.

Renting an apartment in Bratislava might cost you around 500$ for a one-bedroom apartment outside of the city center and might cost you well over 1000$ if you are looking for a nice, modern and bigger apartment located in the center or some of the premium areas.The location is usually the most important part of the cost, apart from that it is quite flexible and you can choose what you prefer.

How Does the Average Person Spend Their Money in Bratislava?

This just shows that both rent and food are very expensive in Bratislava and that people living there might have a hard time dividing their expenses between the two.

After rent and food, the biggest expenses are restaurants and transportation.

Bratislava is, after all, filled with delicious food, so you’re practically forced to go and spend a huge part of your income on eating out.

Utilities have a higher percentage than in most cities around the world.

People living in Bratislava say it is a great place to live even though, taking into consideration the prices, the wages are low because people around Slovakia don’t have strong unions.

With a minimum wage of 587$ many can’t cover their expenses, especially if they’re renting an apartment.

Average monthly net salary is higher than what is considered the country’s average – it amounts to 1100$, which is enough to cover all your expenses and have a little more on the side for fun pleasures and travels – that is if you are smart about managing your salary.

What About Travel Safety in Bratislava? 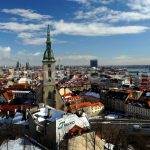 Cost of Living by City in Bratislava