How Much Does It Cost to Live In Amsterdam?

Amsterdam is the capital of Netherlands and as such, significantly more expensive than most other cities in the country.

Your expenses depend directly on your own lifestyle and what you’re ready to give up or splurge on: for example, if you really don’t want to save money, your monthly expenses in Amsterdam will be close to 4000$ per month, but, again, it depends of course on your lifestyle.

Living outside of Amsterdam will be cheaper, and you can use public transport, which is excellent in Amsterdam, to get to work.

Cost of Living in Netherlands

Eating out is very expensive in Amsterdam nowadays, and you can expect to spend around 17$ per meal per person plus something like 3$ for a very small bottle of Cola which means that you’ll probably spend around 20$ per person. When eating out, choose inexpensive restaurants that look decent, and if you want to save up, just avoid the top upscale restaurants.

Purchasing in a grocery store or a market is the best way to enjoy a variety of food and healthy groceries. Fresh veggies and fruit are always available at relatively low prices. If your grocery shopping experience turns out expensive, you can reduce its general price by shopping at cheaper alternatives like the market or stores such as ALDI. Count on spending around 60-80$ per week on groceries.

The usual price for a monthly pass throughout Amsterdam is somewhere around 100$, but the good thing about this is that you have access to any form of transportation you wish to use (bus, train, tram, etc.) If you’re looking to save some money, you can always use a bike which is very common in this country. You can buy a second-hand bike on Facebook for 120$ tops. Look up Marketplaats for cheap bikes.

Utilities are rather expensive in Amsterdam. All the basic ones, including water, cooling, heating and garbage services, including taxes for water and trash (which are different in every district) amount up to 170$ a month. Internet isn’t cheap either, costing around 45$ a month – including TV cable and phone (or you can get slow internet which will then cost you about 15$ a month).

Sports and fitness are not as pricey in Amsterdam as you would expect! A membership at a fitness club for one adult costs around 40$ a month. Keep in mind that most gyms in the Netherlands work on a yearly or a 6-month contract. Cinema tickets, in turn, are very expensive: going to the movies will cost you around whopping 13$ per person.

Brand-name clothes usually have the same prices as in the rest of Europe which are generally higher than in the US, while Amsterdam has even higher prices for clothes than other European cities. For example, Levi’s jeans cost about 95$ while quality running sneakers of brands like Nike cost about a 100$. Light pieces of clothing in chain stores like Zara cost a bit less than 40$.

Rent in Amsterdam is extremely expensive. For an apartment in the city center, you’ll have to cash out around unbelievable 1700$. There are, however, some decent options for around 1100$ for a one bedroom apartment, here and there, but that’s not the norm. If you decide to move a bit further from the center, it will cost you around 1300$.

How Does the Average Person Spend Their Money in Amsterdam?

In Amsterdam, without a doubt, the biggest chunk of an average paycheck gets spent on rent which is ridiculously expensive in this city.

The next huge expense is the food and a large portion of people’s salaries gets spent in markets or grocery stores.

Restaurants take up the next spot on the list, since food can get pretty pricey, and those who are well-off eat in restaurants practically every day.

As usual, the smallest amount of money is spent on clothes and accessories, while sports and leisure take up almost 5% of all expenses.

Those that get a minimum wage of about 1500$ might have some hard time covering all expenses, especially if they’re renting an apartment in such an expensive country.

Still, the minimum wage in Netherlands is the third best in the EU.

However, average monthly net salary is pretty high, and though their expenses are high too, an average citizen of Amsterdam can live comfortably and have no problem earning for a living.

Of course, those renting an apartment will always have a harder time paying off their bills and rent, but generally speaking, Amsterdam has a high living standard.

What About Travel Safety in Amsterdam? 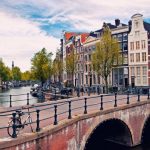 Cost of Living by City in Amsterdam