How Much Does It Cost to Live In Rotterdam?

Rotterdam is one of the major cities in the Netherlands – and though it’s not huge, it has a feel of a “big city” both in architecture and in culture.

The city is very friendly and cheap compared to the rest of the country.

There is a lot of space and anything you can ask from a city (like parties, sport, shops that don’t close at 5PM) and above all, it’s very international and welcoming, both in the university and outside of it.

You can live a fairly comfortable life with around 1200$ a month. And don’t forget to buy a bike!

Cost of Living in Netherlands

Rotterdam is full of restaurants, cafes, food kiosks and all things connected to food and typical for a big city. Although it is much less expensive than all other major cities in the Netherlands, it still doesn’t mean that the prices are low and eating a meal out could cost you around 20$ – even at an inexpensive restaurant.

If you’re super smart about your groceries, you can save a huge chunk of money by buying your food in supermarkets instead of eating out. A good piece of advice is that shopping in stores like Lidl or Aldi saves you a huge amount. Most basic ingredients cost around a dollar but if you want to save a significant amount of money you should remain thrifty when grocery shopping.

As already mentioned – the crucial thing when living in Rotterdam is – getting a bike! Hardly anyone drives a car or uses public transportation – they usually use bikes or go on foot. Still, you can get a one-way ticket for public transport that costs around 4$ and a monthly pass for all forms of public transport that is rather expensive but useful, costing around 70$.

Utilities are much less expensive in Reotterdam than in, for instance, Amsterdam. Those living in a bit bigger apartments (like 85m2) will have to pay bills for all basic utilities like electricity, water, heating and cooling, that cost around 200$. Internet isn’t as expensive, amounting up to around 50$ a month – and that’s for a high speed internet, too.

Fitness and sports are not as expensive in Rotterdam as in other Netherlands’ cities. If you want to go to a fitness club in Rotterdam, you will have to pay around 27$ a month (which is actually less than the country’s average), or 22$ for an hour of renting a tennis court. If you want to watch a movie here, expect it to cost around 13$.

Shopping for clothes in Rotterdam is as expensive as you would expect it to be in a country of such high standards – and though it’s a lot of money, if you put your mind to it, you might find a light piece of clothing for a small price. Usually, jeans of good quality cost around 100$, as do quality sneakers, while lighter pieces of clothing are around 40$.

How Does the Average Person Spend Their Money in Rotterdam?

Rent is very expensive in Rotterdam, so it only makes sense that the biggest part of one’s salary gets spent on it.

The rent is still extremely expensive in the Netherlands, but almost as much money gets spent in markets, shopping for food and necessities.

Transportation and restaurants take up the next chunk of expenses on the list, since they are also pretty costly.

This makes sense given the fact that even the inexpensive restaurants don’t serve food for less than 15$ and you’ll need around 100$ to just be able to move around Rotterdam using public transport.

Salaries in Rotterdam are very high taking into consideration their expenses, but their general standard of living is high – a typical standard of the Netherlands as a whole.

With a minimum wage reaching above 1500$, a citizen of Rotterdam can live in this country and cover all their expenses.

However, those that are renting have a harder time paying the bills and their monthly rent, but it is possible.

The average salary is well above 2500$ so an average citizen of Rotterdam should have no problems living here, considering expenses in this city.

What About Travel Safety in Rotterdam? 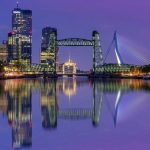 Cost of Living by City in Rotterdam