How Much Does It Cost to Live In Johannesburg?

It’s very important, because it is the economic hub of South Africa, and increasingly for the rest of the continent!

Living costs range greatly, and depending on personal preference.

Still, like most other South African cities it has both poverty and incredible wealth. You can drive for twenty minutes and see the beautiful buildings right next to slums, shacks and outside toilets.

It is a developing city and yet, it still has a high standard.

Johannesburg is a multicultural city, and therefore a melting pot of cuisines from different regions of the world. Citizens of Johannesburg Joburgers love dining outside, and a culture of pavement cafes and restaurants has sprung up on various streets around the city. Eating out in restaurants in Johannesburg, again like the rest of South Africa, is cheap compared to Europe or even India.

Supermarkets in Johannesburg tend to feature primarily South African and African brands, so there’s a smaller number of American and Asian foods. Everything is very cheap though, so you should have no problem cooking at home and saving a lot of money by eating in. If you like South African wine, buy it here before you leave, because it is much cheaper than anywhere else.

Johannesburg on foot can be unsafe or at least scary, so it’s not advisable to walk around. The city is practically built for the car and so public transport is in the development process. The Gautrain (a speed train not part of the metro system) is a good, clean and safe way to move around the city. Then there are orange putco buses, which are more regular than the metro buses and are slightly more expensive.

For an apartment of a normal size (of about 85m2) utilities in Johannesburg are just above 90$, including electricity, heating, cooling and water. Cell phone services are considerably lower than in many countries, while high-speed internet can get a bit pricey, varying along the lines of 68$ per month.

In Durban, the prices of gym and fitness center are reasonable and most tourists interested in sports will be able to pay for fitness membership that cost about 35$ a month. Entertainment and leisure activities are very cheap. You can see world class american acts and sports for half the price you would pay in the US.

Shopping Malls are very popular in Johannesburg, due to their convenience and safety since this country has a high rate of crime. Shopping centers are your best bet to have a good time shopping. Here, you’ll see mostly South African brands since South African malls feature primarily local boutiques and local chains. You can buy quality jeans like Levi’s for around 53$ and a pair of running sneakers for 87$.

While you can cut down on living expenses by following a simple lifestyle, you cannot cut down on one thing and that’s rent. It is also one of the bigger expenses on your monthly budget. Depending on where you want to live, rent can get pricey. If you want to be in the Sandton area you may spend between 700$ to 1000$ a month on an apartment.

How Does the Average Person Spend Their Money in Johannesburg?

Based on these statistics, it can be concluded that people in Johannesburg spend most of their money in supermarkets and markets, buying food and necessities.

They also spend a lot of money covering their rent expenses and utilities, which is normal, considering that these are things that need to be paid.

In Johannesburg, people also spend a lot of money on transportation, and considering the fact that it is an extremely large and spacious city, this is also to be expected.

The least amount of money gets spent on clothing.

Generally, there’s a high rate of employment in Johannesburg, as long as you do have a tertiary education.

The cities in this country are slowly developing and raising their standards and that applies to Johannesburg, too.

This is why the salaries here are very high.

The average monthly net salary is around 1200$, which is really high, but there’s a huge gap between an average salary in this city and its minimum wage.

Namely, the minimum wage in Johannesburg is around 250$ and that is a staggeringly low amount of money for this city’s standards.

What About Travel Safety in Johannesburg? 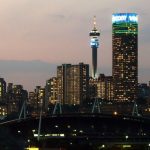 Cost of Living by City in Johannesburg