How Much Does It Cost to Live In Pretoria?

Pretoria, the administrative capital of South Africa, which is why it’s an important city for the nation.

Government departments dominate the city center and it’s not as commercially vibrant as it once was, since people now tend to shop in malls.

The area East of the city center is the most cosmopolitan.

Cost of living in South Africa is generally high, if you want to live safely, and that goes for Pretoria too.

Still, the amount of money you spend here directly depends on your lifestyle and general situation.

Pretoria has a lot of fancy restaurants and cafes where you can have a great time and spend a bit more money than eating street food. If you wander off to an inexpensive restaurant, you can have a very decent meal for around 8$. However, if you go to a mid range restaurant, expect to pay a little more. Generally, though, Pretoria offers plenty of delicious and cheap food.

Of course, grocery shopping is a better choice if you’re the type of tourist that likes to cook, as it is way cheaper. You can cut half the meal budget. Of course, eating street food is always a cheap option, but if you’re someone who prefers home-cooked meals, then this is a great combo for you, as it is also cheaper. Markets and supermarkets in Pretoria offer affordable prices for its products.

By South African standards Pretoria has reasonably well-organized public transport. However, the most commonly used form of transport in this city is either a private car or by shared taxi. Taxis can carry about 12 people but are invariably overloaded and behave unpredictably. They are more expensive than buses but they’re still not too steep – taxi start is around 1.36$.

The monthly price of basic utilities, including electricity, heating, cooling and water, for a normal-sized apartment of around 85m2, amounts to around 80$. Compared to that, internet is a little bit more pricey, costing more than 70$ a month. Bear in mind that the cost of utilities directly depends on the size of your apartment.

In Pretoria, the prices of gym and fitness center are reasonable and most tourists interested in sports will be able to pay for fitness membership that cost about 35$ a month. Entertainment and leisure activities are very cheap. You can see world class american acts and sports for half the price you would pay in the US.

People shop at really big shopping centers that are usually about 5 to 10 kilometers from the center. Like in most other South African cities, shopping in Pretoria is somewhat affordable. You can buy a pair of quality jeans for around 50$, while you can buy other types of light clothing like shirts and dresses in known chain stores like Zara or H&M for less than this.

While you can save up some money on many other aspects of living, you cannot cut down on one thing and that’s rent. It is also one of the bigger expenses on your monthly budget. However, the peculiar thing about this city is that here, it doesn’t matter whether you’re looking for an apartment in the city center or a bit further – the prices range somewhere along the scale of 350$ for a one-bedroom apartment, wherever you are!

How Does the Average Person Spend Their Money in Pretoria?

Naturally, the biggest bulk of money in Pretoria is spent by its citizens in markets and supermarkets – where people spend on food for a living.

They also spend a lot of money covering their rent expenses which don’t have a high percentage in taking part of one’s salary – only 22%.

This goes to show that rent is reasonably priced in this city.

People of Pretoria mostly use minibus taxis which explains why transportation costs take up around 18% of one’s entire income.

As per usual, sports and clothing take up the least money from one’s total monthly income.

In Pretoria, the standard of living is very high, and so are the average monthly salaries.

The cities in South Africa are slowly developing and raising their standards and that applies to the city of Pretoria, too.

The average monthly net salary is around 1100$, which is relatively high, and makes a huge gap between an average salary in this city and its minimum wage.

Namely, the minimum wage here is around 250$ and that is a staggeringly low amount of money in order to get by anywhere in South Africa.

What About Travel Safety in Pretoria? 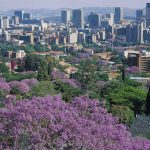 Cost of Living by City in Pretoria