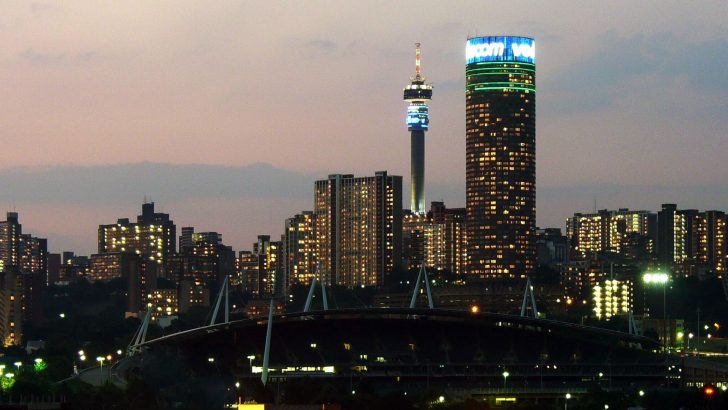 Johannesburg, South Africa’s largest city, with a population of 9.6 million people – half of which live in Soweto and adjacent suburbs – is one of the most important cities in the country of South Africa.

Johannesburg is the economic hub of the country since approximately 10% of South Africa’s GDP generates there.

And though it’s one of the main cities, with rich neighborhoods, you’ll be surprised how many dangerous areas it contains.

It has a reputation of a lawless city.

When in Johannesburg, you can do a lot of shopping, though bear in mind that here everything shuts up shop at lunchtimes on Saturday, and doesn’t reopen until Monday.

That means that weekend sightseeing just goes a little bit harder so it’s smart to plan your weekend.

If you walk around a bit, you’ll find that the city is filled with many craft markets and beautifully crafted beadwork and wirework being sold on the roadside and at intersections.

As fun and exciting Johannesburg might be, you should be aware of the many dangers that await the unsuspecting tourists. This city has extremely high rates of crime. You should be vigilant and take all possible precautions measures to minimize the risk of something going wrong.

Public transport in Johannesburg is the scene of many criminal activities. Muggings on public transport are on a decline, but be aware of criminals waiting around at Johannesburg airports and then following tourists to their accommodation to rob them. There have also been reports of luggage thefts at the airports. Rails and metro trains are also the locations where assaults and robberies have occurred.

Pickpocketing has been on a decline during the past couple of years. Still, the riskiest locations where you may encounter petty theft are crowded places such as markets, public transport and bus, and train stations.

Johannesburg may become a victim of occasional tsunamis coming from the Indian Ocean. Another danger is flooding. One of the bigger floods in South Africa occurred in 2011 killing 91 people.

Mugging and robberies are a much bigger issue in Johannesburg than in other major cities of South Africa. And though usually, the motive of these incidents is theft, rape is sadly not uncommon at all, so female tourists should be particularly cautious.

Threats are coming from extremists linked to Daesh (formerly referred to as ISIL), as well as threats from individuals inspired by terrorist groups, including Daesh, who might try to carry out so-called ‘lone actor’ attacks targeting public places.

Scams happen in Johannesburg at every step. There are a couple of popular scams, one of them involving criminals posing as "tourist police" with a goal to rob visitors. They are known to stop tourist buses, saying that they're checking identification and searching luggage. However there's no such thing as "tourist police" in South Africa, so be on the lookout. Then there are so-called "strollers", and they can be anyone from children to junkies. Their only goal is to rob you blind so keep your valuables well hidden. You can report scams by calling the following telephone number: +27 11 9705300.

Though many female travelers went to Johannesburg and had no problems at all, this country once had a reputation of a place where women were raped at every step. Be very careful at night and avoid risky situations such as winding-up in deserted and poorly lit streets or finding yourself in an unknown area with strange people.

So... How Safe Is Johannesburg Really?

Johannesburg has a reputation of a lawless city and very high crime levels, so the sight of police and security guards is very common.

However, though crime rates are very high, tourists are seldom victims, since the crimes occur in areas rarely frequented by tourists.

Though it’s a rather rich city, it is not at all uncommon to hear about muggings and armed robberies in this country.

However, what is more, important than knowing what kind of crimes tend to occur in Johannesburg, is knowing the areas and hotspots where they’re more likely to occur.

If you wind up in an insecure neighborhood, just try to blend in, look like a local and avoid displaying any signs of wealth or significant personal property.

Keep your cellphone hidden, and in general, keep in mind that it’s best to leave all your valuables in your accommodation.

Such an area in Johannesburg, for example, is Hillbrow, one of the worst Johannesburg suburbs.

Avoid this area and if you end up in it, try to blend in and not look like a tourist.

Hillbrow is a den for prostitution, drug deals and crime.

How Does Johannesburg Compare?