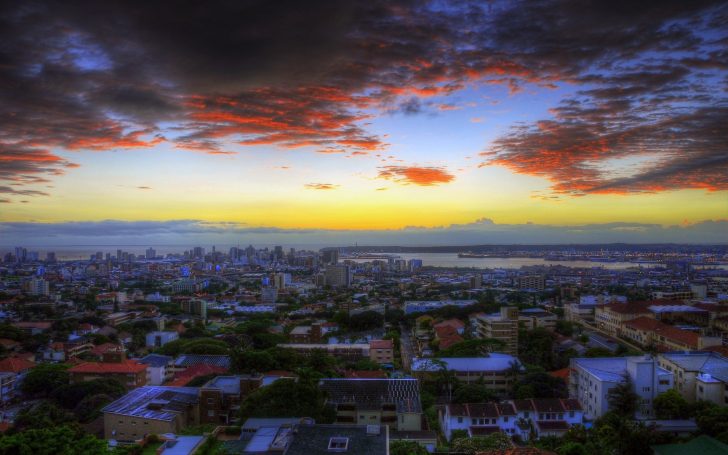 Durban is one of the cities in South Africa that may trick you into thinking you’re in Europe or America.

However, though it looks very modern and safe, it is not.

It’s supposed to be one of the safest cities in South Africa, but unfortunately, even so, the crime rates aren’t low.

The city of Durban is located on the east coast of South Africa in the province of KwaZulu-Natal and the municipality of eThekwini.

It’s the third-largest city in South Africa and the busiest port in Africa.

Durban has plenty of activities and sightseeing to offer, but the tourist is mostly interested in The Golden Mile, the complex of beaches near downtown that go along the Indian Ocean.

These beaches are famous for excellent surfing opportunities and wide sandy beaches.

A bonus if you visit off-season is that you’ll practically have the place to yourself.

As amazingly fun and exciting Durban might be, you should be aware of the many dangers that await the unsuspecting tourists. This city has extremely high rates of crime. You should be vigilant and take all possible precautions measures to minimize the risk of something going wrong.

Public transport in South Africa is the scene of many criminal activities. Be aware of criminals waiting around at Johannesburg and Cape Town airports and then following tourists to their accommodation to rob them. There have also been reports of luggage thefts at the airports. Rails and metro trains are also the locations where assaults and robberies have occurred.

Pickpocketing has been on a decline during the past couple of years. Still, the riskiest locations where you may encounter petty theft are crowded places such as markets, public transport and bus, and train stations.

South Africa is often the victim of many natural disasters such as floods, earthquakes, storms, and wildfires. One of the bigger floods in South Africa occurred in 2011 killing 91 people.

Mugging and robberies are a much bigger issue in this country than petty theft. In Durban, it is not as big of an issue as in other cities of South Africa. And though usually, the motive of these incidents is theft, rape is sadly not uncommon at all, so female tourists should be particularly cautious.

The biggest terrorists attack in Durban was in June 1986, since then, there were a few incidents in recent years as well.

There are a couple of popular scams, one of them involving criminals posing as "tourist police" with a goal to rob visitors. They are known to stop tourist buses, saying that they're checking identification and searching luggage. However there's no such thing as "tourist police" in South Africa, so be on the lookout. Then there are so-called "strollers", and they can be anyone from children to junkies. Their only goal is to rob you blind so keep your valuables well hidden.

Though many female travelers went to Durban and had no problems at all, this country might not be the safest choice for female solo travelers. Be very careful at night and avoid risky situations such as winding-up in deserted and poorly lit streets or finding yourself in an unknown area with strange people.

So... How Safe Is Durban Really?

Though Durban is a very dangerous city, the areas near the beach are secured.

The beach strip is frequently visited by policemen, and there are CCTV cameras apart from it being brightly lit.

Since there are poor areas in this city, it is not at all uncommon to hear about muggings and armed robberies.

And though usually, the motive of these crimes is theft, rape also occurs from time to time, which is especially relevant for female visitors.

There have also been reports of food and drink spiking, with victims ending up being assaulted and robbed after the incident.

However, what is more, important than knowing what kind of crimes tend to occur in Durban, is knowing the areas and hotspots where they’re more likely to occur.

The promenade along the beach, for example, is safe to visit, but be sure to blend in and not go to the side and back roads of the hotels.

The usually busy central business district is empty after dark, so it’s best to avoid it.

At night, it is highly recommended to stick to the main streets and not go out on look walks after dark unless you are very familiar with the places you’re going.

How Does Durban Compare?