How Much Does It Cost to Live In Uruguay?

Uruguay is a country in South America, and the second smallest one, at that.

It is also one of the most (if not the most) expensive countries of all South America.

This is why the quality of life is excellent here, that is – if you have the financial means.

Low population means plenty of green, large stretches of lovely coast and other such advantages.

Uruguay : Cost of Living by City

You won’t find a country with bad food in Latin America. So if you visit Uruguay, you shouldn’t miss the best restaurants that it offers. If you go to any of these, count on them being expensive, but you can also have a decent meal in an inexpensive restaurant in Uruguay, and pay only about 12$!

Uruguay does not manufacture most consumer goods locally and as a result, most goods in Uruguay cost as much as in Australia, Canada, or Europe and are definitely much more expensive than in the USA. There are many public markets, though, where you can get a hundred varieties of meat and many actually say that in this country you’ll eat meat of highest quality.

Cars are very expensive compared to the US or most of Europe and due to this fact, many Uruguayans get around solely by foot, taxi, scooter, motorcycle, or bus. Luckily, Uruguay has an extensive internal bus system. The buses are frequent, safe and comfortable. Taxis in Uruguay exist, and they’re safe and fairly affordable, costing about 2$ per kilometer. All taxis in Uruguay use meters and have fixed costs.

Utilities are a bit pricey in Uruguay, though it depends on the size of your apartment. For an apartment of about 85m2, basic utilities including electricity, heating, cooling, water, gas and garbage services will amount to 120$. Internet is relatively cheap compared to that – around 30$ per month.

Practicing sports is definitely a costly pleasure in Uruguay, like in most other countries. If you want a membership in a gym or a fitness center, it will cost you around 50$. As for leisure and activities like going to the cinema to watch a movie, it’s relatively expensive, too – one cinema ticket will cost you 9$.

Uruguay is like many developing countries in the sense that the retail industry is still dominated by small specialized shops, small supermarkets, and small, crowded shopping malls, so you won’t find huge shopping halls where you can roam around for hours. Still, you’ll find some great clothes, but don’t expect low prices.

What is most likely when you move to Uruguay is that accommodation rental will probably eat a large piece of your income. The numbers for rent can go down if you get a roommate and you can cut the extra expenses to half depending on your lifestyle. An apartment in the city center will cost you around 500$, while a bigger apartment for the whole family, also in the center, costs around 840$.

How Does the Average Person Spend Their Money in Uruguay?

Despite the high prices of rent, food is still the sole biggest expense of the people of Uruguay.

We’ve established that rent isn’t the most expensive aspect of living in Uruguay, but it’s definitely expensive taking into consideration an average monthly salary of an average citizen of this country.

Like anywhere, clothing takes up an insignificant amount of money from an average person’s paycheck in Uruguay.

An average monthly salary in Uruguay is around 770$, which is not as high as it sounds – taking into account the prices in this country.

It’s also just about enough if you’re renting an apartment.

The good thing about Uruguay is that, if you have a good skill set and you are proficient in English, you could apply to a wide range of international companies and live with that wage (one of the best paid is IT).

If you are earning less than the average salary, then paying all your bills is a bit more difficult.

Minimum wage in Uruguay is around 408$.

What About Travel Safety in Uruguay? 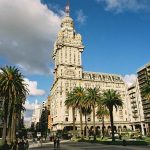 Cost of Living by City in Uruguay