How Much Does It Cost to Live In Chile?

The cost of living in Chile is frequently compared with the developed countries around the world and it is estimated to be affordable.

Due to its political and economic stability, Chile is an attractive destination for foreigners who are looking for a better place to work and live, as this country boasts the highest salary rates in the region.

Chile is not inexpensive, but it is significantly cheaper than other countries in South Africa, such as Brazil.

Chile : Cost of Living by City

It is always good to find the answers to the questions and concerns about the affordability of restaurants as a means of leisure and entertainment liked by the majority of people and when it comes to these costs they are not too pricey, but are not suitable for the minimum wage earners.

The cost of food in Chile is usually compared with the cost of groceries in other Latin American countries, and they are more expensive in Chile.

If you buy fruits and vegetables at the markets, you will be able to save money as they are cheaper than in supermarkets.

Public transport in Chile is efficient and affordable, due to the fact that you can commute the whole month for just $43.

Buses and the metro are economical means of transportation, while driving is not, due to the high price of gasoline.

In addition to paying the housing costs, you should set a budget that includes utilities as they are not part of the rent.

Paying for basic services is necessary and it will take you around $135 a month.

Internet access is not as expensive as in Canada, but neither so cheap as in some European countries.

What sport and entertainment mean for your budget depends on your own preferences.

People in Chile spend pretty much money on various means of entertainment.

Tennis lovers would not be satisfied with the high costs of court rent.

All in all, it can be noted that Chile is an affordable country when it comes to clothing items.

However, people who earn the minimum wage probably will not have enough to cover all the expenses and afford designer clothing above all, so it is not unusual that the least money is spent on apparel.

Once there, you can either decide to buy or rent the apartment as the prices in the country are among the cheapest in Latin America.

Being able to rent a three-bedroom apartment in the city center for $800 is almost imaginable in many countries.

How Does the Average Person Spend Their Money in Chile?

The cost of living is the amount of money you need to be able to lead a decent life, including paying some of the basic expenses such as housing, food, utilities, and transport.

By getting familiar with the way Chileans spend their monthly budgets, you can successfully organize your own.

Chile is a country where rent takes less money than food, but utilities and entertainment are equally important, and an almost identical amount of money is spent on them.

Even though the rent is not so high, the other costs of living in Chile are high when the minimum wage is taken into consideration.

The average wage is usually estimated to be high enough to cover all the expenses, and this is possible for those who possess their places of living,

How expensive it is to live in one city versus another depends a lot on your lifestyle and monthly spending, so if you are a savvy person you will know how to make use even of the minimum wage in Chile.

What About Travel Safety in Chile? 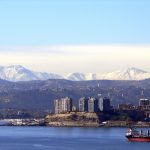 Cost of Living by City in Chile