How Much Does It Cost to Live In Venezuela?

Venezuela is a country in South America and home to world’s greatest wonders: the highest waterfall, Angel Falls, the second longest river in South America, the Orinoco, and the longest coastline on the Caribbean sea.

Venezuela cost of living is relative. It can be the worlds most expensive country, or the cheapest: namely, there are three official exchange rates, and a black market rate and there’s a huge difference between them.

It would be best to have some guidance from someone who lives there and knows the situation very well.

The quality of life is low in Venezuela, the crime is on a rise and there’s a lack of food basics.

Venezuela : Cost of Living by City

If you’re a foodie, most food is really cheap here, as in 2$ in El Baretto with soup, beverage and dessert included, or 10$ in a fine restaurant, per person, but eating a few entries, main dish, a dessert and a few drinks. McDonald’s will get you its biggest burger for some 3$. Like pretty much everything else, eating out is cheap in Venezuela.

Food is a bit tricky. It goes up by the week, so one can’t really put a number on it. But you can eat virtually anything you like with 100$ a month. The price of food in Venezuela is at the moment, probably, the cheapest in the world, with every major globally-sold product costing much less here than anywhere else.

There are three options for travel inside the country: car rental, using buses, and using cars-for-hire. Luckily, the price of gas is very cheap, so the bus system is extensive and extremely affordable. If you want to travel within cities, people usually take the taxi. Taxis are more expensive than any other form of transport, but still affordable. Caracas has a modern and cheap metro system (although it is crowded and a bit dirty!) currently being expanded.

Utilities are just worryingly cheap in Venezuela, though it still depends on the size of your apartment. For an apartment of about 85m2, basic utilities including electricity, heating, cooling, water, gas and garbage services will amount to 9$. Internet is relatively expensive compared to that – almost 6$ per month.

You can go to the movies for about 0.5$ (and often – even less) per ticket and 2$ for popcorn, chocolates and a huge Pepsi. And outdoor activities like hiking are free in El Ávila, so you can save some money you would otherwise spend on a gym. Practicing sports is definitely costly in Venezuela, but not for foreigners: a membership in a gym or a fitness center will cost you around 7$.

Clothing is cheap too. This means you can buy a whole closet with around 100$ to 200$. Name brands though are around the same price as in the US. Fine Nike shoes will go up to somewhere around 80$, but you can sometimes find them in their stores, certified original for way less, if the dollar goes up suddenly, which happens a few times a year.

Rent is also very cheap though it still depends on the area. A great apartment in El Rosal, two bedroom, kitchen, washing machine and parking space, could cost around 300$ a month. In Altamira, a really nice zone, it would be at around 500$. Anywhere else, a studio apartment can be as low as 100$, or even 80$. You can even find a place where you can get a two-bedroom with garden and parking space for about 150$.

How Does the Average Person Spend Their Money in Venezuela?

Like in most countries and cities, an average person living in Venezuela spends the biggest part of their salary on food, but it’s extremely noticeable here, in Venezuela where the percentage of income that gets spent on food goes well beyond 40$.

Food takes up a lot more of people’s salaries than rent, which means that rent isn’t the most expensive aspect of living in Venezuela, but it’s definitely expensive.

What’s interesting (and unique!) about this country is that it’s among the only ones where the expenses on clothing and shoes go well beyond both utilities expenses and expenses on sports and leisure.

A minimum wage in Venezuela is less than 7$ a month and average wage is less than 25$, making the Venezuelans that don’t have foreign assets or income (though there’s a few million that do) the poorest people in the world.

All this due, of course, to socialist economic measures that have destroyed commerce and industry, and thus – the wages.

An average monthly salary in Venezuela is only around 25$, which – to us is staggeringly low, but for them is just natural at this point.

If you’re renting – then paying all your bills and buying necessities is a bit more difficult.

Minimum wage in Venezuela is around 6$.

What About Travel Safety in Venezuela? 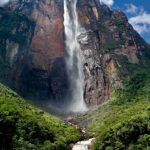 Cost of Living by City in Venezuela