How Much Does It Cost to Live In Chicago, IL?

Chicago is a huge American city in the Midwest and the third largest city and metropolitan area in the United States with a city population of nearly 3 million.

As for the cost of living, Chicago is far less expensive than other cities like LA, NYC and San Francisco, and many say it’s actually the least expensive metropolis in the United States.

Social life here is generally inexpensive in Chicago, depending on the standard you’re comfortable with. This is a city that takes fast food very seriously and if you don’t concern yourself with calorie counting, Chicago will be a heaven for you. There are plenty of fast food chains and inexpensive restaurants where you can eat for only 15$.

Chicago has some of the least expensive taxi fares in the US for a major city, but if it’s still expensive for you, the best way to see Chicago is by public transit. It is cheap, efficient, and safe. Owning a car is a big expense, and a difficulty when it comes to parking, but it’s still nowhere near the cost of elsewhere. Depending on the neighborhood, parking will be a minimum of $150.

Utilities are not too expensive in Chicago, if you look at the price of all included utilities for an apartment of a larger structure (85m2): for such an apartment, all basic utilities – including electricity, along with heating and cooling, water, gas and garbage services – costs around 120$. Internet is pretty pricey though, amounting up to 60$.

Again, comparing with the prices of everything else, enjoying some sports and fitness activities isn’t that expensive in Chicago either – it’s in accordance with the European standard. Becoming a member of a gym or a fitness club will cost you around 50$ a month. Going to the cinema costs nearly the same as it does in most popular European destinations – around 12$ per ticket.

The most famous shopping street in Chicago is a line along the Michigan Avenue known as The Magnificent Mile, located in the Near North area. There, clothes are available and priced at reasonable rates. For example, a pair of quality jeans like Levi’s costs around 50$, a pair of quality running sneakers like Nike are around 80$.

A one bedroom apartment could run anywhere from 400$ – 600$ in the rougher areas of the city like East Garfield Park, Englewood,etc. to roughly 1500$ or more in parts of Lakeview, The Gold Coast, Andersonville or fashionable neighborhoods such as Wicker Park and Bucktown. It really only depends upon where you choose to live.

How Does the Average Person Spend Their Money in Chicago, IL?

Rent is the biggest expense of anyone living in Chicago, along with food and groceries.

Apart from food and rent, people spend a lot of money on transportation and restaurants – since there are many people who are used to eating all three meals in restaurants.

Utilities are also a considerable expense for an average person living in Chicago – as this is something that just has to be paid, like it or not.

Even though it’s cheap by American standards, Chicago is still an expensive city to live in and much of your earnings can end up going towards simply taking care of your essentials (housing, food, utilities, etc.).

If you earn less than 80-85$ thousand per year, you may be unable to own a vehicle and you are probably not going to live in one of the better neighborhoods unless.

Luckily the average monthly salary is almost 4000$, which is definitely reasonable amount of money that just goes in line with the high standard of living here.

What About Travel Safety in Chicago, IL? 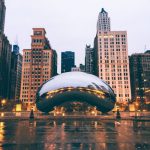 Cost of Living by City in Chicago, IL