How Much Does It Cost to Live In Nashville, TN?

It has been Tennessee’s largest city as of 2017. It is usually called the “Country Music Capital of the World” or more often “Music City, USA”.

The cost of living in Nashville has doubled just in the past five years. Davidson County (Metro / Nashville) has even tripled in most areas.

Cost of living is high and wages are low. But the place is growing.

However, still, the food isn’t getting rave reviews, and, aside from (country) music, culture is hard to find.

Restaurants can be pricey but you can find cheaper places with good quality food if you look and research what you want. Food isn’t very diverse in here and even when it is, it’s pricey. Like all cities, you’ll find restaurants that are more upscale and areas that are more low income. You can expect to eat in an inexpensive restaurant for no less than 15$.

Groceries are taxed but seem to be less expensive than elsewhere in the country. You should definitely try cooking sometimes – preparing your meals by yourself will cost you much less than eating out. Nashville has all the regular stores and supermarkets most major cities have and the prices are pretty reasonable and affordable.

Nashville MTA, the state’s public transport, has routes that operate throughout downtown and the surrounding area. It isn’t too expensive: a ticket is 1.70$ for an adult local fare. An all-day pass for an adult is 5.25$. Most of the garages in downtown are around 5$ most nights.

As for the rest of utilities, they are actually pretty high, if not the highest in Tennessee. For example, for an apartment of 85m2, all basic utilities – including electricity, along with heating and cooling, water, gas and garbage services – will cost you as much as 160$ which is above the state’s average.

If you’re into staying fit by practicing fitness or going to the gym, Nashville has you covered! Namely, becoming a member of a gym or a fitness club will cost you a bit over 35$ a month, which is reasonable. Cinema, in turn, is on par with other Tennessee cities, but still somewhat expensive – 12$ per seat.

Nashville offers the best shopping places found in any major city. It has stores downtown, and if you’re looking for malls, Nashville has them and they’re reasonably priced. Here you can buy a pair of quality jeans like Levi’s for a bit more than 40$, and pair of sneakers like Nike for nearly 80$.

As a result of the high demand for housing, both house prices and rental rates have gone up faster than average incomes. Rent has climbed 75% in the last decade which is why you shouldn’t expect to find a cute apartment anywhere near the center for less than 1500$ – and that goes for one-bedroom apartments! If you want to move in a larger apartment, then prepare to cash out nearly 3000$.

How Does the Average Person Spend Their Money in Nashville, TN?

Rent has climbed 75% in the last decade due to Nashville’s popularity, so renting and buying are unfathomably expensive these days.

Apart from food and rent, people spend a lot of money on transportation (and this includes gasoline expenses, taxi rides as well as car rental expenses) and restaurants – since there are many people who are used to eating all three of their meals in restaurants.

Wages are fairly low in Nashville compared to the cost of living and many people work several jobs to make ends meet.

If you have a decent job, expenses are affordable in Nashville – but barely.

Economy wise, the city is still growing and has a pretty good foundation.

Employment in tourism is easy to find but the pay compared to the working hours is not the best.

You can be paid well depending on what your skills are, same as anywhere.

Minimum wage in Nashville is around 1200$ – and though the prices are higher in this city too, this is still a reasonable amount of money that just goes in line with the high standard of living in Tennessee.

What About Travel Safety in Nashville, TN? 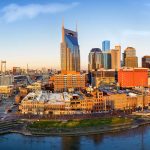 Cost of Living by City in Nashville, TN