How Much Does It Cost to Live In New Zealand?

New Zealand is an island country in the southwestern Pacific Ocean, known for its high prices and a very pleasant standard of life.

The cost of living depends a great deal on where you live and on your living situation.

For example, living in Auckland is quite expensive depending on one’s average income.

Of course, it makes sense that one earns more in the big city of Auckland, but the lack of supply in housing and apartments means rentals are high and house prices are out of reach for most people.

Living out of Auckland in other smaller towns would definitely save considerable amounts of money – on rent, primarily.

Eating out will, for sure, cost you more than cooking by yourself.

Since New Zealand is known for its relatively high prices, you can expect to eat in an inexpensive restaurant for no less than 16$.

Food and essentials are relatively more expensive than in places like the UK where more competitive markets exist.

For example, only two corporations are involved in the grocery store sector and that’s why groceries cost more, too.

Vegetables, for example, are insanely expensive in winter, and you’re better off buying them in a farmer’s market.

Public transport is not as widespread here, which means a car is a necessity, and that – naturally, leads to more costs.

You really need a car if you want to get around Auckland and major cities, as the transport infrastructure is not that great and the motorways are congested.

A one-way ticket for public transport will cost you around 2.30$.

Utilities are not too expensive in New Zealand if you look at the price of all included utilities for an apartment of a larger structure (85m2): for such an apartment, all basic utilities – including electricity, along with heating and cooling, water, gas and garbage services – costs around 140$.

Internet is pretty pricey though, amounting to 55$.

Compared with the prices of everything else, enjoying some sports and fitness activities isn’t that expensive at all.

Becoming a member of a gym or a fitness club will cost you around 40$ a month.

Going to the cinema costs nearly the same as it does in most popular European destinations – around 12$ per ticket.

Clothes are available at many shopping centers but are only occasionally priced at reasonable rates.

The best thing to do when it comes to shopping for clothes is to wait for a sale!

Rent is definitely one of the more expensive aspects of living in New Zealand.

Don’t expect to find a cute apartment anywhere near the center of any of the major cities for less than 1200$ – and that goes for one-bedroom apartments!

If you want to move in with your family in a larger apartment, then prepare to cash out at least 2000$.

How Does the Average Person Spend Their Money in New Zealand?

Apart from food and rent, people spend a lot of money on transportation (and this includes gasoline expenses, taxi rides as well as car rental expenses) and restaurants – since there are many people who are used to eating all three meals in restaurants.

Utilities are also a big expense for an average person living in New Zealand – as this is something that just has to be paid, like it or not.

Salaries in New Zealand are definitely high and make living in New Zealand a very pleasant and comfortable experience since they enable the citizens of this country to pay for everything they need and have enough even for the things that aren’t necessities.

The minimum wage in New Zealand is around 2,444.9$ – and though the prices are higher in this country too, this is still a reasonable amount of money that just goes in line with the high standard of living in New Zealand.

This country is definitely not the most expensive place to be and most people get by without any problems, but many say that it could be better, too.

What About Travel Safety in New Zealand? 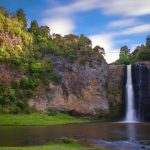 Cost of Living by City in New Zealand