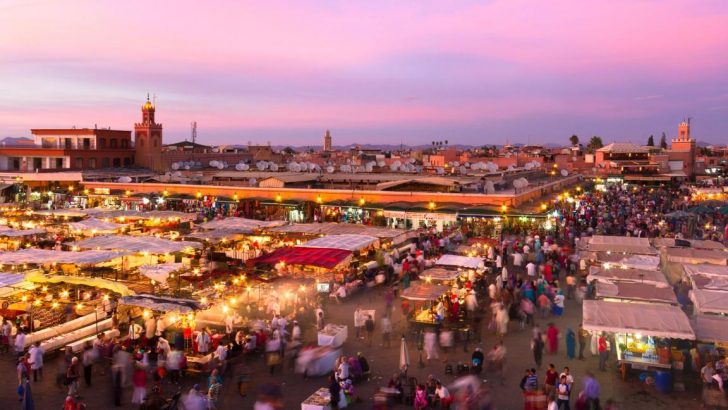 Morocco - safety as a country

Marrakech is the third-largest city in Morocco, located near the Atlas Mountains and only a few hours from the Sahara Desert.

Its location and contrasting landscape have made it an enviable destination in Morocco.

The city is founded almost 1000 years ago and it grew to become one of the great cities and a Unesco Heritage site.

Marrakech is not a too dangerous city since its crime rate is not so high, but it is important to pay attention to your surroundings and keep your luggage and money in a secure place. If you do not need to take the valuables with you when walking around the city, it is better to leave them in the room or the hotel safe. Since Marrakech is a Muslim city, you need to respect the Islamic laws and customs.

Public transport in Marrakech is safe, but the attention should be paid to thieves that might operate on buses. The poor driving conditions make buses unsafe. However, if you decide to travel by taxi, bear in mind that taxi drivers will try to take advantage of you.

Petty crime is common, and even older people are known to be pickpockets and bag snatchers. Tourists should be careful in public areas and beaches and should take neither valuables nor a passport with them because they might get mugged when walking on deserted beaches and poorly lit streets at night.

Some of the possible natural hazards in Marrakech are flooding during the rainy season and earthquakes. You should be vigilant when it comes to dangerous animals, like snakes, which are very frequently found there.

Even though petty crime exists in Marrakech, muggings and kidnappings happen very rarely. Terrorist organizations might happen to kidnap Western people since the animosity exists, so tourists need to be aware of this general threat and maintain a high level of vigilance. Kidnappers aim to ask for a ransom which in turn increases the risk of further kidnappings.

Terrorists might try to attack in Marrakech since the threat of terrorist attacks exists everywhere, and there have already been terrorist attacks in places frequented by tourists in the past. International terrorist organizations operate here and even though you are not the direct target, you might find yourself in the middle of the attack since they can happen anyplace at any time.

Special attention should be given to the people around you while withdrawing money from an ATM since there are numerous reports of robberies that have occurred near ATMs. Credit card fraud is common. Tourists are often offered help with directions that will be charged later on. Taxi scammers may grab your luggage from the trunk. Police are patrolling to catch Moroccans who are trying to withdraw money from tourists.

Women are not fully safe in Marrakech since if they travel alone, they may attract unwanted attention from men. You should respect their religion and dress modestly in clothes that cover your arms and legs, to avoid being assaulted.

So... How Safe Is Marrakech Really?

All in all, Marrakech is a safe city, and the police presence makes it even safer.

However, always pay attention to your surroundings because thefts are known to happen.

Due to the increased threat from international terrorism, Marrakech might be the target of their attacks so you need to contact authorities if you notice anything suspicious.

Violent crime is normally not a major problem, but you need to avoid dark streets especially at night.

Still, Marrakech is a beautiful city to explore, rich in history, tradition, and culture, so do not allow anything to destroy your journey there.

How Does Marrakech Compare?