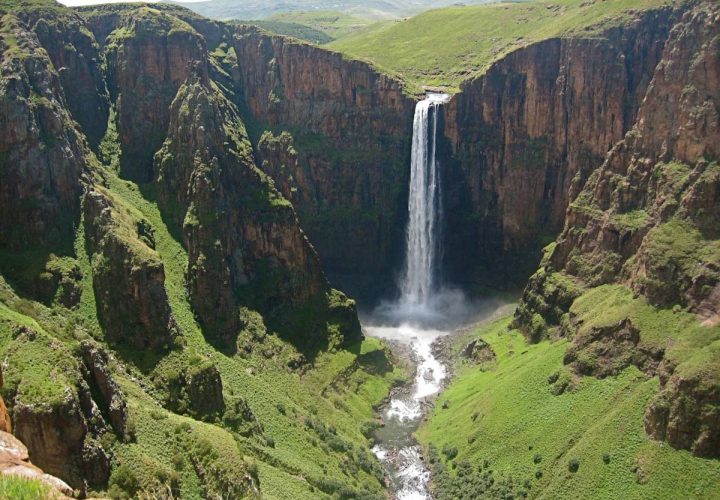 Lesotho is a country located in Southern Africa, and is often referred to as the Kingdom in the Sky due to its altitude — it has the highest lowest point in the world (1400m) and is the only country in the world to be entirely above 1000m!

Lesotho is completely surrounded by South Africa and has many attractions to offer which make it an adventurous holiday destination.

When it comes to unique adventures Lesotho has to offer, look no further than the Kome Caves – the staggering cave houses once built by the Basotho people with a purpose to form the cannibals.

For the nature lovers, visit Semonkong Falls known as the falls that drop 200m in a single plunge!

There is really no prettier experience than swimming in a pond below these waterfalls during summer, while during winter, the pond freezes making a natural ice rink – which is probably the most perfect sight to see in this country.

Another impressive feature of Lesotho – real dinosaur footprints that can be seen around the country: the most accessible areas are near Moyeni & Morija.

Lesotho is generally considered a safe country to travel to. However, even though it has served as a safe haven and a sanctuary from all the troubles that are hitting the rest of Africa pretty hard - Lesotho also has its issues with crime, both petty and violent, illnesses and poverty.

Expect rugged terrains when driving in Lesotho. But this is not the biggest problem when it comes to transport in Lesotho. It is essential to remember that car thefts are common here, as are smash-and-grabs. Lesotho's drivers are usually driving in a reckless and erratic way, and other means of transport are unreliable and slow.

Pickpockets do operate in Lesotho, especially on Lesotho's crowded buses and other types of public transportation as well so make sure you're holding your bags and belongings tightly by your side while traveling.

Many natural disasters have been known to hit Lesotho, including floods, drought, frost, strong winds, and heavy snowfall. These have caused many human and livestock deaths and cause substantial material damage, damage to properties and loss of crops.

Violence is a particular problem in Lesotho. Robberies and muggings are common and while guns aren't that commonly used, knives are, and if you find yourself in such a situation, hand over everything they want immediately, as they will have no problem using violence against you if you resist.

Although Lesotho has experienced no terrorism attacks, they shouldn't be ruled out, so it is best to remain vigilant at all times, and aware of your surroundings.

As in any country, there is the risk of getting scammed. Expect that people will try to extort some money from you whenever they can as this is a poverty-ridden country. You might get overcharged by everyone: street vendors, taxi and bus drivers, and accommodation owners. Double-check every information and payor negotiate everything in advance.

Lesotho isn't the safest destination for a solo female traveler. You should, by all means, avoid going anywhere alone after dark and strive to have some company even during the day. Follow basic common sense and avoid walking alone at night and in poorly lit and secluded areas.

So... How Safe Is Lesotho Really?

Lesotho has had a reputation of a safe haven – a sanctuary from all the political turmoil that has hit other countries of Africa.

And while it has maintained its independence, it’s fighting its own battles – with poverty, illness, and crime.

Its urban parts are more and more dangerous though the rural areas are so beautiful and filled with gorgeous sights and things to do that there’s little reason to hang around the cities.

Now, the aforementioned crime in urban areas is probably the biggest concern for visitors.

The crime rate in Lesotho’s capital Maseru is considered to be crime critical by the US department of state.

This applies to the nearby towns of Maputsoe and Hlotse, too.

Don’t spend much time on the streets after dark and never stray off well-lit and busy streets.

Be particularly cautious along the stretch between Maseru’s hub of hotels, as well as in the business district as they are notorious for robberies.

When it comes to muggings and robberies, mostly knives are used, but gun crime is on the rise, especially in Maseru.

If you are targeted don’t put up any resistance and hand over your belongings immediately as potential robbers will probably not hesitate in using violence.

Always ride with your car windows up.

How Does Lesotho Compare?