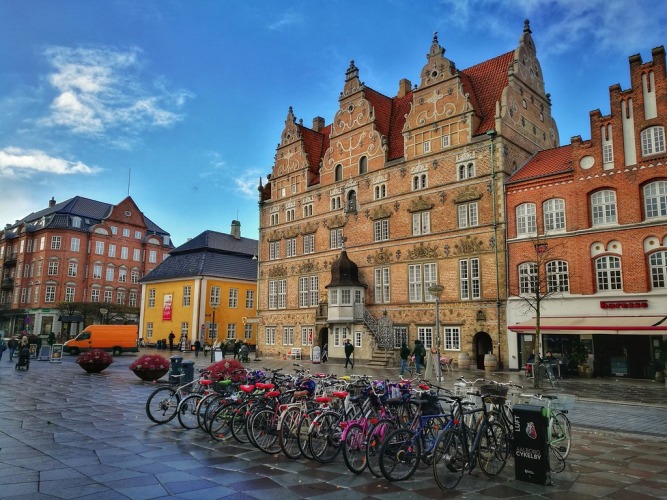 Denmark - safety as a country

Aalborg is Denmark’s fourth-largest city with an urban population of 139,016.

Architecturally, the city is known for its half-timbered mansions.

Today, Aalborg is a city in transition from a working-class industrial area to a knowledge-based community.

Despite its industrial background and the factories along its waterfront, travelers come here to see historic buildings, museums, churches, and parks.

Also, the interest of visit shows The Aalborg Carnival, held at the end of May, is one of the largest festivals in Scandinavia, attracting some 100,000 people annually.

Jomfru Ane Gade (literally Virgin Anne’s Street) is one of the most famous streets in Aalborg if not in Denmark.

Popular for its cafés and restaurants during the day, it is even busier at night with its clubs, discos, and bars.

Aalborg is a very safe city to visit. It's even one of the safest cities in Europe. However, using common sense should get you out of any trouble.

Public transport and taxis are safe enough in the city. Nonetheless, pickpocketing in crowded buses can have a place. Keep cautioned.

In the city, there are practically no occasions with pickpockets. However, the usual caution measures are still should be done.

There is almost no natural disaster hazard in Aalborg. The little chance of earthquakes or coastal cliff collapses may occur.

Muggings are not occurring in Aalborg. However, it is best to avoid strangers offering your help and be wary of people trying to distract you since it might be a trick to steal something from you.

In Aalborg, cases of terror are practically not known. However, as elsewhere, you should be alert and study the news.

The risk of scamming not so high in Aalborg. No one tried to cheat tourists on their way.

Women traveling alone in Aalborg can feel absolutely relaxed and safe at any time of the day or night.

So... How Safe Is Aalborg Really?

Aalborg is known as Europe’s happiest city. It called so by its own citizens and the study of the European Commission.

People in Aalborg are more satisfied with their lives than in any other city in Europe.

It’s worth saying that the crime rate is negligible here.

The citizens of Aalborg are also among those who feel the safest in Europe, with 96 percent saying they feel safe in the city.

In Aalborg, 91 percent of respondents also said that most people in the city could be trusted.

Travelers can feel safe when walking during the day. And, normally it’s nothing to be afraid of nighttime.

Aalborg is a great place for a trip. Tourists here should not be afraid of assault or robbery.

Even things left in the car should be safe, but it is always better not to leave valuable items in the car.

Aalborg also is a tolerant place, where no one meets the skin’s color, ethnicity, religion, or sexual orientation harassment.

Anyway, keep your belongings locked while traveling and especially when on the road that leads to the airport.

Passport and valuables should be in a protected place.

Always keep an eye on your valuables as pickpockets and street thieves are active in touristic areas.

How Does Aalborg Compare?