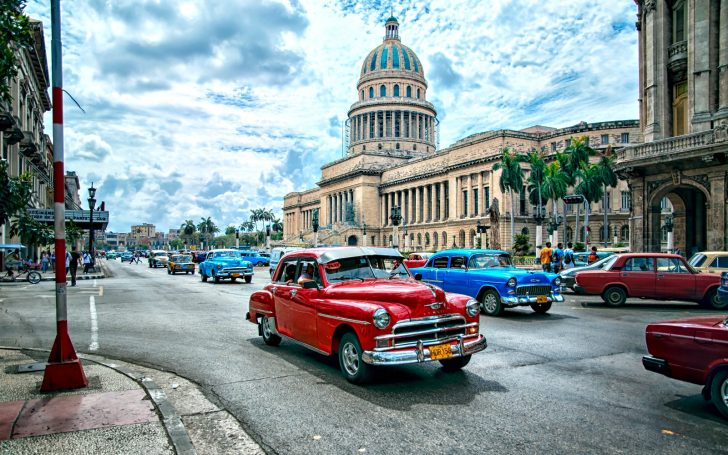 Cuba is the largest Caribbean island located between the Caribbean Sea and the North Atlantic Ocean.

It is situated about 145km south of Key West, Florida, geographically positioned between the Cayman Islands and the Bahamas, to the west of Haiti, east of Mexico, and northwest of Jamaica.

Cuba is certainly a unique experience: with friendly, smiling people at every step (and that means literally at every step because, in Cuba, it is normal for people in every neighborhood to sit at the steps in front of their own houses and people-watch at all hours), gorgeous culture and staggering history, perfect beaches like the one in Varadero, and breathtaking sights in the capital of Havana (which is a landmark by itself) such as the well-known Malecon, you will certainly have a wonderful time.

Add in the never-before-seen nightlife and the music that will make your feet dance through no will of your own, with landmark cafes and clubs where Nat King Cole and Hemingway used to spend their time, such as La Bodeguita del Medio and El Floridita Bar, and you can rest assured that you will certainly never erase this country from your memory.

Cuba is, for the most part, a safe country to visit, though it's not without its dangers. You should be vigilant and take all possible precaution measures in order to minimize the risk of getting stolen from.

Cuba is filled with unlicensed cabs without meters so be sure to pre-arrange a ride with a reliable cab company. There are also many old-timers Cuba is known for that will overcharge you for a ride in their shiny car.

There is a threat of petty crime. Pickpockets do operate, especially at the beaches and in public transport so you should be extremely careful when handling your valuables and never carry your money in a purse or a pocket. Theft of hi-tech items is also on the rise.

There is a hurricane season in Cuba, and it usually lasts from June to November. This is the only thing you should be aware of when it comes to natural disasters.

There have been reports of muggings happening in urban areas, but it's not that common of an occurrence because criminals would have to pay a steep price to the authorities if caught. There is usually no force or weapons involved.

There haven't been any recent terrorist attacks in Cuba's recent history, but they shouldn't be ruled out. Be aware of your surroundings at all times.

This is where you should be particularly careful: the local scammers. Taxi drivers will probably try to overcharge you for the ride, the local drifters will catch you on the street and convince you that they live in the same street your accommodation is, with a goal to attract your attention. They sometimes give you some advice where to go and what to do and then ask for a tip. Since cigars are their most popular product, Cubans will try to trick you into buying cheap ones making you believe they are original. Only buy cigars in official cigar shops.

Cuba is not only a low-risk destination for women, it is actually one of the destinations where women should feel very safe. Cuba is a country with a high degree of feminine integration into the society. It is almost a normal occurrence for a man to comment on the beauty of any woman and this should be taken as a compliment because it definitely was given as one. These comments do not have a sexual connotation and should be answered with a polite "gracias".

So... How Safe Is Cuba Really?

Cuba is generally very safe to visit, with strict laws and prominent policing, along with neighborhood-watch-style programs that exist in order to keep the streets violence-free.

As a tourist, even though the streets are dark and it feels like you should be very vigilant at every corner, in a few days you will start feeling very safe as there is virtually no gun crime, violent robbery, organized gang culture, teenage delinquency, drugs or dangerous forbidden-for-tourists zones.

Local criminals try to avoid targeting foreigners because, if caught, they are forced to pay a very steep price.

Apart from people trying to extort some money from you by offering you their help and local scammers that streets of Havana are filled with, you will have no problems.

However, due to very strict laws and dictatorship that has lasted for decades back, political topics should be avoided at all costs.

You should handle their political situation with respect and discretion and don’t start up a conversation about it, if not necessary.

Many older Cuban people will have zero tolerance for negative comments about the revolution or Fidel Castro.

Avoid references to countries linked with communism such as North Korea or the Soviet Union.

Generally speaking, Cubans will feel uncomfortable talking about politics or if they notice a negative attitude towards their political system.

How Does Cuba Compare?