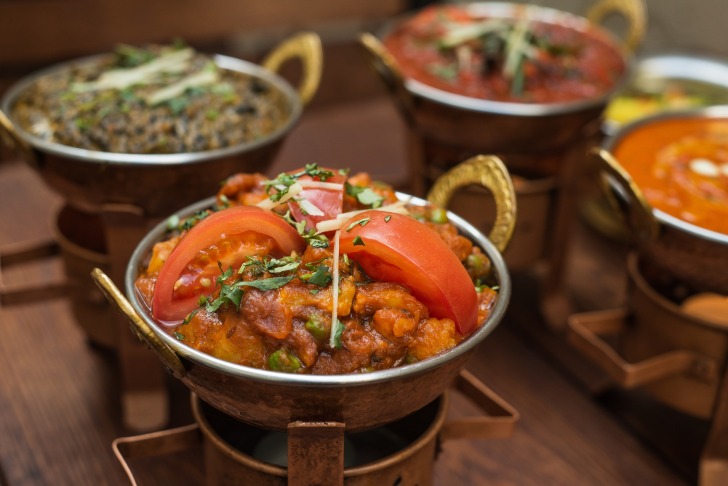 Many vegetarians say that some of the world’s most delicious meatless dishes come from India.

Visit an Indian restaurant and you will see that the menu is a neverending story of different tastes and delicious dishes.

Or better, go to India for a unique culinary experience.

When it comes to a vegetarian or vegan diet, India is a culinary haven with nutritious plant-based ingredients such as lentils, chickpeas, potatoes, cauliflower, beans, rice, and whole grains.

Plus, if you believe that food is a medium for delivering mouthwatering spices, India has endless options for you.

Coriander, turmeric, cumin, mustard seed, cayenne, and many other spices can transform a simple vegetable dish into a palate-tingling experience.

Whether you are a carnivore or vegetarian, scroll down and take a look at our plant-based culinary tour of India.

The northern region of India is influenced by an agricultural lifestyle and its dishes are rich, buttery, and full of flavor.

Despite its reputation as a meat-loving region, census data show that roughly 67 percent of North Indians are vegetarian.

This healthy plant-based meal is very easy to prepare, all you need is a large pot and 30 minutes.

The end result is an incredibly flavorful, stew-like curry.

Dal, or lentils, is another basic vegetarian ingredient in Punjab.

It can be prepared in many ways, such as Dal Makhani (black lentils in cream) or as the lehsuni variety (garlic with orange lentils).

Cooking these dishes traditionally is an all-day work, but if you have a pressure cooker, you can have them ready in less than two hours.

Southern Indians are seafood masters who use coconut frequently and can not go longer than a meal or two without rice.

Vegetable Biryani, an Indian version of Chinese fried rice, is a local specialty in Kerala.

Rice is mixed with fresh vegetables and spices such as nutmeg, cloves, cardamom, cinnamon, and coriander.

Another popular southern staple that can be eaten at any time of day is the masala dosa, a thin crispy pancake made from lentil flour and a batter of rice.

If you are in the region, do not miss Bangalore, India’s southernmost city, which has recently been declared the most vegan-friendly, with a multitude of restaurants and markets serving up tasty meat-free foods.

The Rajasthan region is the center of India’s vegetarian cuisine.

With more than 75% of the population identifying as vegetarian, it is a kind of expert in the field.

In Gujarati, you must try the popular Gujarati thali, which translates to “full plate meal.”

It is a large round platter with an assortment of delicious small dishes.

Take some naan and try the ringana methi (eggplant with fenugreek leaves), the aloo rasila (potato and tomato thin curry), and the undhiyu (mixed vegetables with spinach paste).

Due to the region’s extreme aridity, its food culture has had to adapt.

Dal baati churma is an unleavened bread that needs little water to produce and can be kept fresh for several weeks.

Since water is scarce, most soups and sauces are milk-based, so be careful if dairy causes stomach upset.

Gujarat is famous for its sweetish dishes, as almost every plate contains a pinch of sugar.

Near India’s border with Tibet and Nepal, the cuisine is influenced by its mountainous neighbors.

Here you can try a lot of soups, stews, steaming hot noodle dishes, and dumplings.

Try also thukpa, gyakho, and tongba, which is a famous Himalayan millet beer.

What is characteristic of India’s Bengal region is that dishes are served in courses.

They also use mustard oils and chili pepper to add a spicy flavor to the dishes.

Or try Bhapaa Aloo, a bowl of potatoes tossed in garlic, mustard oil, and coconut paste.