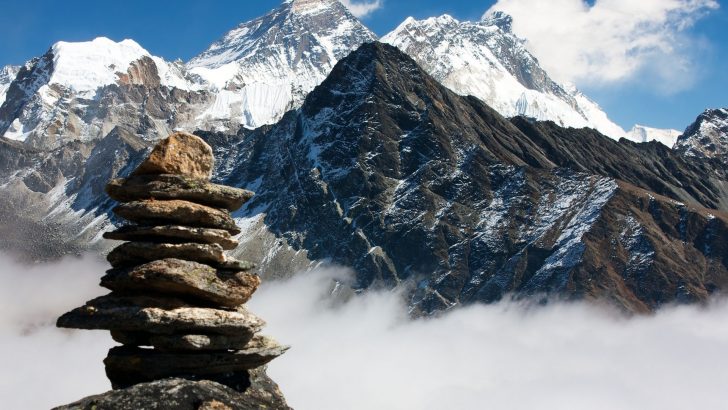 Nepal is located in Southern Asia, squeezed in between the Tibet autonomous region of China and India.

The most popular aspect of this country is its mountains and the fact that it boasts as many as 8 of the world’s 10 highest peaks, including Mount Everest – the world’s tallest peak.

This is also the most common reason tourists rush to see this magnificent country: the snow-covered mountains waiting to be explored by the bravest, most eager hikers.

The country counts 90 peaks which lie above 7000m, but that is not the only geographical aspect of this country: there is another part that takes up about one-third of the country and it’s rather low-lying and subtropical.

Apart from hiking, you can count on gorgeous mountain landscapes after which you can cozy up by a hot meal, a cozy cabin, and a warm dessert or tea.

And hiking is not the only way to boost up your adrenalin in Nepal: there is rafting or bungee jumping, canyoning, climbing, kayaking, and paragliding, making this country a unique adrenaline-filled experience for all nature-loving tourists.

Nepal is a relatively safe country to travel to. Though its crime rates are not very high and it's filled with friendly people, its greatest dangers lie in nature, so be very cautious when exploring this country.

Transport is highly risky in Nepal. Avoid traveling to Nepal's hills or mountains by bus or air since it's hundreds of times more dangerous than traveling anywhere else, due to cliff-top locations of airports and stations.

Pickpocketing and bag snatching is a very common issue in Nepal. Keep your belongings by your side at all times and try to leave all your valuables in a security deposit box of your hotel.

When it comes to natural disasters, Nepal is susceptible to many of them, such as floods, landslides, fires, epidemic, earthquakes, avalanches, windstorms and droughts.

There are some areas where cases of mugging have been reported, though violent crime rates are low and foreigners are rarely targeted.

Although Nepal has experienced no significant terrorist attacks, it has an open border with India and weak border controls which makes way for the concerns that international terrorist groups could reside in Nepal and use it as a transit state.

As in any country, there is the risk of getting scammed. You can get overcharged by everyone: street vendors, taxi and bus drivers, and accommodation owners. Double-check every information and pay or try to negotiate everything in advance

Nepal is mostly safe for solo female travelers, though some Nepali men often have strange ideas about the morality of Western women, due to seeing them a certain way in movies and TV shows, seeing the way they dress as immodest and often times immoral. Follow basic common sense and avoid walking alone at night and in poorly lit and secluded areas.

So... How Safe Is Nepal Really?

Generally, Nepal is safe to visit, and it’s actually known for extremely friendly people and hospitality towards tourists and visitors.

Its crime rates are low, though you should still exercise caution.

Bear in mind that pickpockets and bag snatchers operate in crowded places such as bus or train stations and airports, as well as tourist landmarks such as Thamel, Sanepa, and Kupondol in Kathmandu.

Even though crime rates are relatively low, you are advised to take care at night and be especially vigilant after dark.

Now, what makes this country dangerous to a degree are the murders and disappearances that happen in Langtang, so avoid trekking alone and always move at least in pairs.

Generally traveling to Nepal’s hills and mountains by bus or air is immensely more dangerous than normal travel anywhere in Western Europe or the U.S., and here’s why:

Lukla, which is the entry point for the Mount Everest trek, is at the same time a place where the most dangerous airport in the world is located, due to its jaw-dropping cliff-top location.

Be very careful when considering ways to approach these locations and generally trekking activities.

Take into consideration that the risks are even higher during the monsoon season which lasts from June to September.

How Does Nepal Compare?