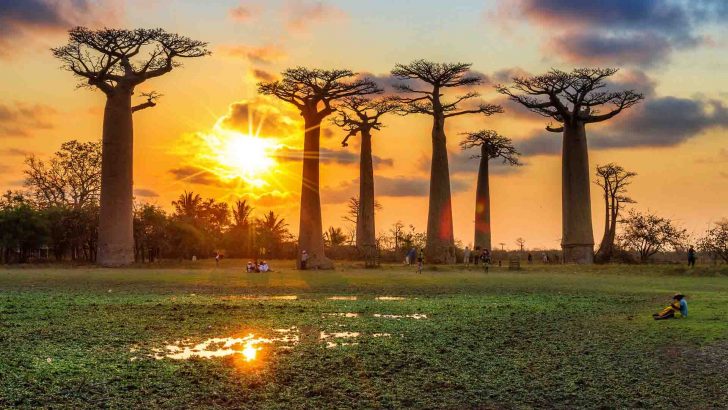 Madagascar, a very well-known country occupying a large island of the same name, is located in the Indian Ocean, just right off the eastern coast of Africa.

The fourth-largest island in the world offers incredible experiences and breathtaking views for its visitors.

There’s the Tsingy de Bemaraha, which is a UNESCO World Heritage Site and Madagascar’s largest reserve (with 152,000 hectares).

It consists of a gorgeous limestone plateau, filled and decorated with a chaotic, maze-like, and razor-sharp collection of pinnacles, the “Tsingy”, also called the Labyrinth of Stone.

You can also count on the vast forest where you just might get a chance to see brown lemurs and several rare species of birds, as well as the very rare, all-white Decken’s sifaka.

There’s also the Avenue of the Baobabs, which is an extraordinary stand of huge baobab trees that are a fascinating site by themselves.

Located near Madagascar’s west coast, this is the most visited landmark in the Menabe Region, as well as a candidate to become one of the 7 Wonders of Africa.

Madagascar’s flora and fauna are virtually unmatched in the world, as over 80% of it exists nowhere else, so visiting Madagascar might be tourists’ only chance to see the Lemurs, Tortoise, Geckos, Chameleons, and unusual flora.

Madagascar is, for the most part, a safe country to visit. However, it does have a rather high crime rate, though it's mainly ridden with petty crime due to vast unemployment and poverty. Tourists are advised to remain vigilant and take all possible precaution measures in order to minimize the risk of getting stolen from.

Transport is not very safe in Madagascar. Be cautious when taking a so-called bush taxi (taxi-brousse) as there were reports of people being robbed by taxi drivers. Driving a rented car isn't much safer since there have been incidences of carjacking and they are on an increase. Most of these crimes occur at night, so do your best to travel only during the day.

Madagascar is known for petty theft. Petty crime (mainly pickpocketing) usually takes place in crowded areas and airports and foreigners are the targets, more often than not. Take precautions when walking in street markets and avoid walking at night in urban areas.

Since Madagascar widely varies in terrains and has a specific geographic location, its land often suffers from a number of annual natural disasters – such as cyclones and tropical storms, flood, drought and locust infestations.

Muggings and robberies are also very common in this country. What is important to remember here is that these crimes occur not only in urban areas but also in nature reserves and beaches. Be very careful around the capital, Antananarivo and southern districts of Toliara and Fianarantsoa provinces.

There haven't been any terrorist attacks recently in Madagascar, but they shouldn't be ruled out. Remain vigilant and aware of your surroundings at all time.

You should expect that many people will try to scam you in this poverty-ridden country. There are a number of scams performed on tourists, and the locals might use tricks to trick you in order to get money from you. Double-check everything, and negotiate everything in advance.

Madagascar is relatively safe for solo women travelers but not at night. Avoid going anywhere after dark. Use your common sense and be aware of your surroundings at all times. Avoid wearing purses and do not walk alone or ride in taxis (or bush taxis) at night.

So... How Safe Is Madagascar Really?

Madagascar is mostly safe to visit since the overall crime rate here is fairly lower than in many other African countries, so many consider this country a safe one to visit.

However, there has been some political turmoil that leads to massive unemployment which, in turn, lead to a rise in crime, especially petty crime and armed robberies.

What is important to note is that these crimes don’t only occur in urban areas but also in nature reserves and beaches.

The problematic spots where armed robberies have been reported are areas around the capital, Antananarivo and southern districts of Toliara and Fianarantsoa provinces.

If you absolutely need to go and visit these areas, you may want to consider hiring a reputable guide.

You should also be very careful when traveling in bush taxis as they have also been reported for robbing passengers.

Rented vehicles are no safer, as there were also cases of carjacking.

However, bear in mind that most of these crimes occur at night, so if you travel only during the day, you might avoid most of these problems.

When it comes to armed robberies, bear in mind that armed bandits tend to position themselves on major routes after dark in order to ambush vehicles, or even stage breakdowns, that way blocking the roadway and forcing drivers to slow down.

The problematic spots where armed hold-ups have occurred are some of the main roads in Toliara province.

Also, if your car is stuck in traffic, keep your vehicle locked with the windows rolled up, as there have been reports of “smash and grab robberies”.

How Does Madagascar Compare?