How Much Does It Cost to Live In Spain?

Spain is a diverse country sharing the Iberian Peninsula with Portugal and a very popular tourist destination.

It is blessed to be the country with the third-largest number of UNESCO World Heritage Sites, right after Italy and China.

Spain is very exotic and beloved among tourists due to its friendly citizens, relaxed and laid back lifestyle, its cuisine and a nightlife that never sleeps.

Spain has a lower cost of living than most Western European countries, but, as always, it depends on your professional and financial situation.

If you become a resident, you will be subject to Spanish taxes that can be very high.

Spain : Cost of Living by City

When you eat out, always look for “Menú del día” (workdays lunch) which can be from 9 to 15$. It’s usually good value and the meals are delicious. Fast food is not yet established and you will find McDonald’s and Burger King only in major towns in the usual places. The Spanish beer is not too bad and well worth a try, costing around 3$ which is reasonable. American franchises generally charge higher prices than in the United States.

This is very variable and it depends a lot on your food habits. Fruits and vegetables are cheaper than in a lot of other countries, and so is meat and poultry. Dairy products are more expensive (than France or the UK) and ready-cooked meals are of the same price as in other countries, so it’s a wise decision to save the money to eat out just a tad more often.

The price and function of public transportation depends on where you are. In major cities like Madrid or Barcelona and in mid-sized ones like San Sebastian, driving a car is both expensive and nerve-wracking. Gasoline is relatively inexpensive compared to other countries in the EU, costing around 1.43$. All the major cities in Spain are served by taxis, which are a convenient, though somewhat expensive.

Utilities are somewhat expensive in Spain. The utilities there amount to 130$ a month for basic ones like electricity, water, cooling, heating and garbage services. Internet remains pricey costing around 45$ a month. You cannot get staggeringly cheap mobile contracts, but something along the lines of 25$ a month can be found.

Spain has 2 contrasting landscapes: the mountainous Pyrenees and the Mediterranean Costa Brava, so in some regions and cities it’s actually great to practice sports outside and save some money you’d otherwise spend on a gym. However, if gym or a fitness club is what you want, a membership will cost you around 40$ a month.

As an average, clothes are a tad more expensive in Spain than in the UK. For example, Levi’s cost about $80. You can buy simpler pieces of clothing like shirts or summer dresses at mass chain stores for prices of around 80$ as well. Spain is also brimming with the usual clothing brands like Zara, Bershka and other shops.

Renting prices truly depend on where you want to live. It can be as “cheap” as renting a room for about 350$ a month or a full apartment for about 750$ a month. Some neighborhoods are extremely expensive (around 1100$ a month) and some other might be more affordable (400$ a month in Viladecans, near the airport).

How Does the Average Person Spend Their Money in Spain?

As expected, the biggest chunk of the paycheck of Spain’s citizens gets spent on food, and in some cities the price of food can be 50% higher than what is considered the country’s average.

Restaurants take up the next spot on the list, since fancy food is a very big part of this city, and the prices are the same for transportation too.

Minimum wage in Spain is somewhere around 1200$ which for some might represent a problem, taking into account that rent takes up a huge chunk of people’s salaries in some cities, like Barcelona, but given the standard, it is manageable.

However, average monthly net salary is pretty high, going well over 1400$ and though people’s expenses are high too, an average citizen of Spain can live comfortably and relax.

The situation with rent will, however, always be a problem for those that earn less, but generally speaking, one could say that the gorgeous country of Spain has a high standard of life.

What About Travel Safety in Spain? 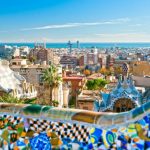 Cost of Living by City in Spain