How Much Does It Cost to Live In Kolkata?

Kolkata is not an attractive tourist destination which was the capital of the British empire before 1911.

That historical period affected the city and enriched it with cultural monuments, educational establishments, and religious places.

In Kolkata, you can become a spectator at one of the numerous concerts, watch a theater performance in the Bengali language, or see a movie in English.

In general, most of the necessary things in Kolkata are inexpensive.

The restaurants in Kolkata offer diverse meals due to the fact that Indian cuisine here prevails.

You can try all the possible dishes of meat and fish, as well as vegetarian meals.

Street food and combo meals similar to McDonald’s are really popular and cheap.

The most popular shopping destination in Kolkata is the New Market where you can buy nearly everything from books and flowers to fresh products, local cheese, dairy products, and pastry.

Moreover, this one and many other markets in the city are open every day which does not limit you in your time and gastronomic desires.

The most expensive are the cheeses, red meat, wine, and cigarettes.

The electric train is considered one of the cheapest and fastest means of getting around the city.

Remember that the Indian peculiarity is the absence of doors in the trains and the presence of singers on board who are trying to make money this way.

Kolkata is one of the Indian cities with an established city telephone network.

The mobile phones are operated by private companies and the national BSNL firm.

A prepaid minute of the mobile connection, a local tariff is $0.01.

The city is connected to the broadband Internet.

The unlimited data cable or ADSL connection at the minimum speed of 60 Mbps is $9.05 per month.

Cricket and football are the two most played games in Kolkata.

This city is often called the most football city of India.

Interestingly, the second largest stadium in the world is located here in Kolkata.

As for the cultural leisure time, people visit museums, theatres, library, and one of the largest book fairs in the world which rather presents than sells the books.

Kolkata cannot be called an extremely popular tourists destination, so the shops and boutiques are not that diverse and umpteen.

Nevertheless, the city has a few nice street markets in every region in the south, west, and north.

The price of the monthly rent in Kolkata depends a lot on the district of the city, the recency of the building and the availability of furniture.

The cheapest are one-bedroom apartments outside of the city center with the prices ranging between $57 and $144 per month.

The most expensive are three-bedroom apartments in the city center.

How Does the Average Person Spend Their Money in Kolkata?

Monthly rent is not the biggest issue for people in Kolkata.

They pay only 16.4% to the landlords and leasing companies.

Raw food in the markets is the largest item of expenditure for most citizens.

They are ready to spend 40.6% of their money on markets monthly.

The cheapest things for Kolkata citizens are utilities and shopping which get 4.3% equally.

The transportation expenses are 12.6% per month, and the transport is often used to travel to work, to the other cities in the state, or to the nearest restaurant in Kolkata.

The latter take as much as 14.3% of the average person’s income which is a really high percentage for this type of cities in India.

Also, a big percentage of money is spent on sports and leisure which means that an average Kolkata citizen is interested in being mentally and physically fit.

The average salary in Kolkata is $373.20 per employee per month.

This sum of money is usually paid to well-qualified local or foreign workers in industries like software engineering, accountancy, IT consulting, and software development.

The lowest salaries of $54.5 nationwide are paid to the least skilled or unskilled workers with minimum qualifications.

What About Travel Safety in Kolkata? 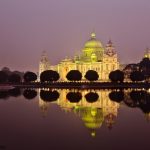 Cost of Living by City in Kolkata