How Much Does It Cost to Live In Wroclaw?

Wrocław is the largest city and capital of Lower Silesian Voivodeship, Poland.

It is also the historic capital of Silesia, so it’s an important city for many reasons.

Wrocław is slowly acquiring a larger European and international profile thanks to the fact that it’s hosting events such as the Euro 2012 Championship and being the 2016 European Capital of Culture.

As for the cost of living, it’s a city with high living standards: the unemployment is very low by Polish standards and the prices are similar to those in Warsaw.

Wroclaw is a place where you can find many Michelin rated places but also, many cheap places where you can save a significant amount of money: think pizza/Chinese food instead of going to classy restaurants or eating at inexpensive places for around 6$. Generally, with an average salary of around 800$, you can eat in most restaurants every day without worrying.

When it comes to groceries, of course, if you cook at home, you can eat modestly for around 40$ a week. However, one good thing about being in a city located in a naturally rich country, is the fresh food! You can always buy fresh fruits and vegetables directly from the farmers at many open markets in Wroclaw. Local shops are opened till late or simply work 24/7.

Public transport in Wroclaw is relatively good, there are buses and trams you can count on, but there is no subway, though. The city itself is full of cars, so traffic jams are a normal thing. If you’re using public transport, the prices are not too high. A one-way ticket to anywhere is less than a dollar, while a monthly pass is around 25$.

As far as utilities go in Wroclaw, your best bet would be to ask about the cost of bills before you rent the place. Your bills in Wroclaw will, surprisingly cost as much as in most other cities in Poland. Basic utilities like electricity, water, gas and garbage services in an apartment of 85m2 will cost you around 170$. During winter, the bills might go up because of the heating. The internet in Wrocław, however, is bad and pretty slow.

Wroclaw is full of great outdoor sports opportunities, so much so that you can casually rent a bike or go for a jog in the nearest vicinity. The mountains are within 1-2 hours drive. In the winter people often go skiing just for one day with a bus. But, if you want to become a member of a gym or a fitness club, you can for around 26$ a month.

Wroclaw has a huge range of mid and big-sized shopping centers and malls, so you can literally choose as per your convenience. Prices are not as low as in some other Polish cities, though. Here, you can buy quality jeans for no less than 70$, and running sneakers of brands like Nike for over 72$. Lighter pieces of clothing will cost you around 35$.

The cost of rent depends on where you want to live in Wroclaw: for example, should you choose a flat in the city center, you’ll probably have a great apartment in a great location but you’ll be paying 70% of your income or more for that – which means around 600$. If you’re looking for an apartment outside of the city, the prices will drop to around 450$.

How Does the Average Person Spend Their Money in Wroclaw?

Not surprisingly, since the rents are very high in Wroclaw (higher than in most Polish cities), an average person living in this city, spends the same percentage of their salary on rent, as they do on food.

In that sense, the biggest expenses for people living in Wroclaw, are definitely both rent and food.

Rents have skyrocketed over the last years due to an increase in tourism because of the recent cultural events in the city.

Apart from rent and food, restaurants and transportation also share the same amount of percentages of people’s everyday expenses.

Utilities in Wroclaw have a somewhat lower percentage than in most other countries.

The wages in Wroclaw are not the best in Europe but they are growing fast: the minimum wage here is around 500$.

Average salary in Wroclaw is over 900$ (which is higher than in most cities), and people can rent an apartment, eat, have fun and even save with such a salary.

800$ – 1000$ is the basic salary structure in Wroclaw, but most other cities have even less, and the people in them usually earn less than the average salary.

The problem, however, remains in the fact that though the salaries are high – most people don’t get to earn them.

What About Travel Safety in Wroclaw? 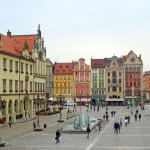 Cost of Living by City in Wroclaw