How Much Does It Cost to Live In Poznan?

Poznan is a large city, located in the west of Poland.

It is very important since it was the first capital of Poland and seen by many as the birthplace of the Polish nation.

There’s plenty to see and do in Poznan, from historical monuments to museums on every corner.

In general, prices in Poznan are lower than in most bigger cities in Western Europe.

However, be careful not to overspend: the amount of money you’ll spend always depends on your own personal priorities and lifestyle.

In one of the longest commercial streets in Europe, Piotrkowska street, located in the city center, you can find a whole bunch of pubs, bars and restaurants where you can eat at fancy places, but also at inexpensive restaurants for only around 5$. There’s always street food too as well as international fast food chains.

In Poznan, you can easily find healthy, non-processed, tasty and cheap food in Lodz, like in most Polish cities, both in supermarkets as well as in open markets, directly from the farmers. This is due to the fact that Poland is very strong and advanced when it comes to agriculture. If you want, you can also go to one of many small stores distributed around the city.

Poznan is one of the cities in Poland where your bills for utilities won’t be exactly small, but the prices are not through the roof either. It mostly depends on the size of your apartment and how much electricity you spend. Basic utilities like electricity, water, gas and garbage services in an apartment of 85m2 will cost you around 170$. During winter, the bills might go up because of the heating.

The great thing about Poland is that it’s a country of vast natural beauties and that allows for many outdoor activities. In Poznan, you can enjoy one of many outdoor sports, but if you want to become a member of a gym or a fitness club, that will cost you 28$. A cinema ticket costs around 6$, depending on the seat and the day of the week.

For a great shopping experience, definitely head over to the Old Town or one of the many pedestrian shopping streets and indulge in this beloved tourist activity. The prices are somewhat reasonable in Poznan when it comes to clothing and shoes: quality jeans cost around 65$, and running sneakers of brands like Nike are just under 70$.

Rent is expensive in Poznan, which is why many people share flats, but renting a small room in an apartment isn’t cheap either. The rents, in general, have skyrocketed over the last years due to an increase in tourism and, of course, AirBnB’s. If you’re looking for a cheap apartment, you’ll have to settle for one outside of the city center, which will cost you around 320$. If you’re looking for a larger apartment, for your entire family, count on paying over 700$.

How Does the Average Person Spend Their Money in Poznan?

Usually, in cities where rent is unusually high, people spend most money on food and rent.

In those cities, almost the same percentage of one’s income goes on rent as it does on food, but that’s not the case in Poznan.

Namely, nearly 5% more of one’s salary goes on food than it does on rent, but rent is definitely on the second place (and in some Polish cities, the percentages for food and rent are virtually the same).

Utilities have a somewhat higher percentage than in most other countries, which means that electricity bills are higher than average.

Restaurants and transportation are also significant expenses for the people of Poznan, with very similar percentages.

Average salary for an average person in Poznan is higher than in some other smaller cities of Poland.

With a salary of 800$ most people can afford a normal life, and after covering all expenses – they can even have some fun and take care of other things that aren’t necessities.

However, a rather small part of the city’s residents earn an average salary.

Most of them hover around 600$ per month, which is definitely problematic for the people of Poznan because it only covers the basis.

What About Travel Safety in Poznan? 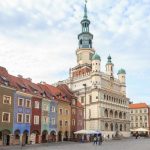 Cost of Living by City in Poznan