How Much Does It Cost to Live In Gdansk?

Gdansk is the largest city and capital of Pomeranian Voivodeship in northern Poland.

It is also a very important city for the whole country because it’s the republic’s principal seaport and it handles a large amounts of imports and exports from the city’s harbor.

The interesting thing about Gdansk is that many people say that price wise – and in comparison with the western Europe – it has one of the lowest costs of living while having one of the highest standards of living.

In comparison to Warsaw, however, the costs of living are almost as high as in the capital.

In the Old City there are lots of lovely cafes and restaurants where you can have fancy dinners and outings – and you can count on these being a bit more harsh on the wallet. However, if you’re looking for a decent meal for a low price, you can always find charming places where you can eat for around 5$. And don’t forget street food too, as well as international fast food chains.

As for groceries, you can easily find healthy, non-processed, tasty and cheap food in Gdansk, both in supermarkets as well as in open markets, directly from the farmers because Poland is to a large extent agriculture-strong. If you want, you can also go to one of many small stores – this way you’ll support local economy.

As for the transportation in Gdansk, it does has some flaws. Many say that traffic jams are an everyday occurrence and that roads have plenty of potholes. However, it is very cheap and it’s easy to move through the town. A one-way ticket for public transport costs less than a dollar, while a monthly pass costs around 25$.

When it comes to utilities in Gdansk, the prices are much higher than what is considered to be the average in Poland. It mostly depends on the size of your apartment and how much electricity you spend. Basic utilities like electricity, water, gas and garbage services in an apartment of 85m2 will cost you around 200$. During winter, the bills might go up because of the heating.

The great thing about Poland is that it’s a country of vast natural beauties and that allows for many outdoor (read:free) activities. In Gdansk, there are cycling tracks and walking paths, but if you want to become a member of a gym or a fitness club, that will cost you 31$. A cinema ticket costs around 6$, depending on the seat and the day of the week.

Gdansk has a lot of shopping malls, cinemas, some festivals – in one word, plenty of leisure possibilities. But for many – shopping is a priority and we’ll treat it as such! Gdansk offers many malls, and the prices are reasonable. For example, you can buy quality jeans for no less than 66$, and running sneakers of brands like Nike for over 70$.

Rent in Gdansk is higher than in most other Polish cities, and this makes sense since it’s the largest city where the prices are as high as in Warsaw. Since it’s such a popular and known city, don’t be shocked to see a studio for around 500$ per month. If you want to save some money, look for an apartment outside of the city, and your rent will drop to around 400$. If you’re looking for a larger apartment, for your entire family, count on paying around 900$.

How Does the Average Person Spend Their Money in Gdansk?

As expected in any city where rent is unusually high, people spend most money on food and rent.

This happens only in cities where rent is a very expensive living aspect, and here, almost the same percentage of one’s income gets spent on rent as it does on food.

Apart from rent and food, utilities have a higher percentage in Gdansk than in most other cities of the world, which means that electricity bills are higher than average.

Restaurants and transportation are equally as important expenses for the people living in Gdansk, according to these percentages.

The trouble about all cities of Poland, when it comes to wages, is that most people living here earn less than what is the average monthly salary.

For example, the average monthly net salary in Gdansk is around 950$, yet most people earn only around 600$ or less – and most of this money will get spent on food and accommodation cost.

The only way to live a comfortable life – which, in this country means having enough for decent clothing, holidays abroad or a good car – is to have a high paying job in Gdansk.

What About Travel Safety in Gdansk? 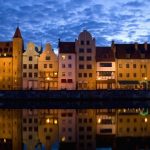 Cost of Living by City in Gdansk