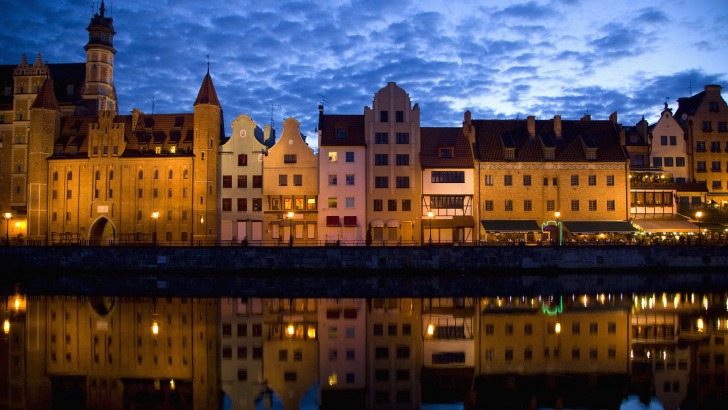 Gdansk is the largest, and very popular city and the capital of Pomeranian Voivodeship in northern Poland.

It is part of the Tricity area (together with Sopot and Gdynia) and offers triple the attraction than the usual city.

Gdansk and Gdynia are also regularly awarded as the best cities to live in Poland.

This city is a perfect place for those who love living by the sea on one side and hills on the other as well as those who like a laid back atmosphere, lots of green open spaces, clean air, bike trails, good connectivity, and an international work environment.

Also, it has a good train connection to Warsaw and South of Poland, as well as cheap flights to Scandinavia and other major cities in Europe.

Generally, Gdansk is a very safe country to travel to. Still, never let your guard down, and be wary of pickpockets and scammers since their activities increased in the past couple of years.

Pickpocketing and bag snatching are common in tourist landmarks and crowded areas. Be vigilant at all times and never leave your belongings in plain sight. Be careful in crowded areas, in railway and bus stations and especially in public transport, since pickpockets often work in teams, and make artificial crowds around tourists to steal from them, or try to distract people as a trick to pick their pockets.

There are no threats of natural disasters in Gdansk. During spring there are occasional floods and during winter there are snowstorms and heavy snowfall. Be cautious when driving during the winter period.

You shouldn't worry about being mugged or kidnapped in Gdansk since it rarely if ever occurs.

Even though there haven't been any terrorist attacks in Gdansk's recent history, they shouldn't be ruled out, so remain aware of your surroundings at all times.

Scams are somewhat common in Gdansk. There are credit card scams with someone calling you on the phone in your hotel room claiming they're the receptionist asking to confirm your credit card details; also be wary of taxi drivers trying to charge you double or convince you that you haven't paid enough (showing you smaller bills instead of the ones you paid with).

Gdansk and Poland, in general, is safe for a female traveling solo. If you want to maximize your safety, you might consider staying in a hotel instead of a hostel.

So... How Safe Is Gdansk Really?

Gdansk is a very safe city and it’s very popular among the youths for being very relaxed, laid back and liberal.

For example, Gdańsk’s one of the most liberal places in Poland when it comes to the LGBT community.

You can find some LGBT clubs in nearby Sopot or Gdynia, too.

Also, be careful when taking a taxi, since taxi drivers have been known to cheat by insisting you didn’t pay enough, in the meantime having hidden the money you paid and showing you smaller bills.

Some areas of Gdańsk are known for being unsafe and filled with petty thieves, like the Dolne Miasto and Orunia areas at night.

Since they are economically neglected, these areas are dangerous because of their poverty and it is best to avoid altogether.

There are several scams to watch out for so don’t let yourself get tricked easily!

How Does Gdansk Compare?