How Much Does It Cost to Live In Warsaw?

Warsaw is the capital of Poland and, with 1.7 million residents, its largest city.

The city is getting increasingly cosmopolitan with more and more people coming to the Poland’s capital.

Warsaw was rebuilt completely after the Second World War, which is the most spectacular thing about the city: you will find it impossible that everything around you is only around 70 years old.

In some areas, Warsaw is even more advanced then the Western countries (banking, online payments, credit cards etc), and in others, it’s only catching up.

Warsaw has, over the years, developed into a place where you can find many Michelin rated places, slow food, lunch rooms and beer gardens. You can also find many cheap places where you can save some money: think pizza/Chinese food instead of going to classy restaurants or just eat at inexpensive places for around 6$.

When it comes to groceries, of course, if you cook at home, you can eat modestly for around 40$ a week. However, one good thing about being in a capital located in a naturally rich country, is the fresh food! You can always buy fresh fruits and vegetables directly from the farmers at many open markets in Warsaw. Local shops are opened till late or simply work 24/7.

Best public transport is precisely in Warsaw: every bus is on time – always, no matter what and if it is 1–2 minutes late, people begin looking around wondering what happened to the bus! On top of that, it’s also very cheap! A one-way ticket to anywhere, by bus, is around 1.17$, while a monthly pass is around 30$.

As far as utilities go in Warsaw, your best bet would be to ask about the cost of bills before you rent the place. Your bills in Warsaw will, surprisingly cost as much as in most other cities in Poland. Basic utilities like electricity, water, gas and garbage services in an apartment of 85m2 will cost you around 160$. During winter, the bills might go up because of the heating.

Warsaw is full of great outdoor sports opportunities, so much so that you can casually rent a bike or go for a jog in a nearby forest. There’s lots of parks too, but there are lots of sport facilities. You can become a member of any such facility for around 30$ a month. There are also many leisure opportunities around the city, like theaters, exhibitions, events and concerts. A cinema ticket in Warsaw will cost you around 7$.

Warsaw has a huge range of mid and big-sized shopping centers and malls, so you can literally choose as per your convenience. Prices are not as low as in some other Polish cities, though. Here, you can buy quality jeans for no less than 70$, and running sneakers of brands like Nike for over 75$. Lighter pieces of clothing will cost you just over 35$.

Around 400$ would be rent for a modest apartment somewhere in Warsaw, of around 45m2. Apartments in Warsaw are very small compared to a more Western environment. The cost of rent, however, still depends on where you want to live in Warsaw: for example, should you choose a flat in the city center, you’ll probably have a great apartment in a great location but you’ll be paying 70% of your income or more for that.

How Does the Average Person Spend Their Money in Warsaw?

Not surprisingly, since the rents are very high in Warsaw (higher than in most Polish cities), an average person living in this city spends a higher percentage of their salary on rent,then on food.

This doesn’t happen too often, only in cities where rent is unusually high: they have skyrocketed over the last years due to an increase in tourism and the emerging AirBnB’s.

The second biggest expense for those living in Warsaw is, without a doubt, food.

Apart from rent and food, restaurants and transportation also share the same amount of percentages of people’s everyday expenses.

Utilities in Warsaw actually have a lower percentage than in most other countries.

The wages in Warsaw are not the best in Europe but they are growing fast: the minimum wage here is around 500$.

Also, due to the fact that it is quite cheap to live in Warsaw, you can live comfortably here, especially if you’re not working and earning your salary here.

If you are, though, that’s not the worst thing: many international companies are here and more coming.

Average salary in Warsaw is over 1100$ (this is the highest paid Polish city), and people can rent a house, eat, travel and even save with such a salary.

800$ – 1000$ is the basic salary structure in Warsaw, but most other cities have even less, and the people in them usually earn less than the average salary.

What About Travel Safety in Warsaw? 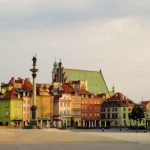 Cost of Living by City in Warsaw