How Much Does It Cost to Live In Malta?

Life in general in Malta is pretty laid back, as we mentioned the cost of living is cheaper than in most of Europe, there are plenty of social activities, entertainment, music, and art at every step, and the weather is also favorable.

Keep in mind, however, that during the last couple of years, the rent prices have been getting higher.

Malta : Cost of Living by City

When it comes to restaurants, almost everyone eats outside because it’s really healthy – and it’s hard to stay inside in such a warm and pleasant country.

However, it is expensive: you would have to pay around 5$ for a fresh large squeezed juice and 10-12$ for a good fresh salad.

A meal for two in an inexpensive restaurant will cost you somewhere around 70$.

Prices in supermarkets are getting higher and higher too: some are claiming that they’re as high as in some of the most expensive countries in Europe.

But there are still some tricks you can follow, for example: if you want to save some money on Liquor, it’s best to go shopping in Pama or Lidl supermarket where the prices are much lower.

Don’t drink beer outside – buy them in supermarkets, where they’re very cheap.

The public transport system is mainly of poor quality and badly organized.

You can always hail a taxi.

Ecabs and Taxify taxi services are quite affordable, with prices ranging from 8$ to 25$, depending on where you need to go.

Utilities are definitely not expensive when compared to other countries in Europe.

They are a small expense, and if you live in a larger apartment, of about 85m2, your basic utilities including electricity, heating, cooling, water, and gas, will cost less than 100$.

Internet is reasonably priced, too, and costs about 35$.

If you’re living anywhere in Europe, you already know how expensive gyms and fitness clubs can get.

This applies to Malta too.

Membership in a gym or a fitness club costs more than 67.23$.

Prices for cinema tickets are the same as in many expensive cities in Europe – if you want to go see a movie, be ready to pay 10$ per ticket.

One of the good things when it comes to shopping in Malta is that all shopping malls are less than 30 minutes of drive away from the cities.

However, there aren’t many options and the prices of clothing are high.

For example, both quality jeans and quality sneakers are as much as 93$ a pair.

Rent is definitely the most expensive part of living in Malta.

You can find cheaper apartments and flats, or even share them with someone, but in comparison to other costs, they are just really expensive.

Renting an apartment in the city center costs around 900$, and if you want one a bit further away from the city, it’s still around 750$.

How Does the Average Person Spend Their Money in Malta?

The average person in Malta spends the biggest part of their money on rent – which is the most expensive toll on their salary.

After rent, people spend a huge bulk of their money on food – which only makes sense, for every single country – you have to eat, right?

Restaurants are the third on the pie chart of people’s expenses in Malta, probably because they’re pretty pricey, while transportation follows since it’s an everyday necessity, and it isn’t exactly cheap here, either.

Clothing, shoes, and accessories, as usual, draw the least money from Malta’s consumers.

Citizens of Malta have relatively reasonable salaries, with a minimum wage of around 900$.

Those that are renting, however, will probably have to set aside around half of their salary for rent only, and then spend the other half on everything else.

The average monthly net salary is around 1300$ which is definitely enough to cover all expenses and not have to worry about your existence.

If you plan on going to Malta, though, and you’re wondering how much money would suffice for a month – around 1300$ would be your best bet – if you plan on living on a tight budget.

What About Travel Safety in Malta? 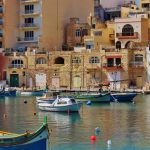 Cost of Living by City in Malta