How Much Does It Cost to Live In Kazakhstan?

Life in Kazakhstan greatly depends on the kind of life you are used to living.

Those who live in Kazakhstan say that life, in general, there is cheaper.

That is not to say that life there is a bargain, however, but it is much cheaper than in plenty of countries where rent is up to three times higher than everything else in that country.

Prices used to be even lower and have somewhat risen recently when it comes to both food and accommodation, but they are reasonable in supermarkets and local restaurants.

Kazakhstan : Cost of Living by City

As already mentioned, prices in Kazakhstan are mostly reasonable when it comes to restaurants (and supermarkets/groceries) though if you cook by yourself you will save much more money.

A meal in an inexpensive restaurant will cost you a bit more than 6$, while a mid-range restaurant of sorts will offer you food for two for around 26$.

Prices in markets are very reasonable, especially if you go shopping for groceries in market chains such as Gros and Ramstore where you can find better quality and variety of food.

You can also make it cheaper if you shop at open markets that pop up a few days a week in most cities in Kazakhstan.

Transportation doesn’t function well in Kazakhstan, although they do have a metro.

It is relatively cheap though – not a bargain, again, and definitely not cheap in comparison to the service you’re getting – but still, cheap enough.

A one-way ticket for public transport costs a very reasonable 0.20$.

Utilities are definitely cheaper than in most European and American countries, especially the popular ones among tourists.

If you’re living in an apartment that is on the larger side, like 85m2, you will be expected to pay somewhere around 50$ a month.

Internet is literally a bargain – 11$ a month for a high-quality service.

Practicing sports or enjoying yourself some gym or fitness time will be relatively expensive wherever you go.

In Kazakhstan, at least, they’re not robbing you blind – it’s somewhere around 36$.

If you want to go to a cinema, a ticket for one seat costs around 4$ which is also relatively cheap for a pleasant afternoon watching movies.

Shopping for clothing, however, isn’t as cheap as everything else in this country.

Sure, you can find quality jeans like Levi’s that cost 64.0$ which is very reasonable, but in comparison to that, a simple shirt costing more than 35$ is definitely expensive.

Quality sneakers cost a bit above 70$.

Given the average salaries in Kazakhstan, one might argue that rent is definitely expensive, especially if you’d like to rent somewhere in the city.

So the rent does make it difficult to sort out your expenses, which is why it might be cheaper to look at the apartments outside of city centers, where you would pay less than 200$ for a one-bedroom apartment.

How Does the Average Person Spend Their Money in Kazakhstan?

The average person spends most of their money in supermarkets, open markets, and other chain stores where you can buy food – like in most countries.

The rent is, however, the next on the list of expenses, because when you look at average monthly salaries, they are really high – almost through the roof.

Restaurants are somewhat pricey which makes them third on the list of most common expenses in Kazakhstan, along with transportation that has to be paid for and is an everyday necessity for all living beings wanting to get to work on time.

A minimum wage in Kazakhstan is as low as 157.9$ and that really puts into perspective the price of rent in this country.

Those who don’t have high salaries will have a hard time affording anything else after paying their rental fees.

The average monthly net salary is around 465.70$, so those who earn that much money can also pretty much just rent an apartment in the city center and get another job for everything else.

If you want to spend a month in Kazakhstan, around 1000$ would definitely suffice and you wouldn’t even have to be thrifty.

What About Travel Safety in Kazakhstan? 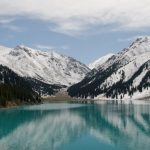 Cost of Living by City in Kazakhstan