How Much Does It Cost to Live In Almaty?

Almaty is the biggest city in Kazakhstan and is a very pleasant destination to live in: good food, pleasant people, relatively cheap life (except for the rent) and gorgeous nature.

The prices in this city are mostly reasonable, if you don’t want to go out every night, spend your money in clubs and eat three meals in restaurants.

Many say that it’s actually not often visited by tourists, which is probably the reason why the prices aren’t sky-high.

The only costly thing in this country, in comparison to the people’s average salaries, is the rent.

Kazakhstan : Cost of Living by City

Cost of Living in Kazakhstan

Prices in Almaty are mostly reasonable when it comes to restaurants (and supermarkets/groceries). A meal in an inexpensive restaurant will cost you a bit more than 5$, while a mid-range restaurant of sorts will offer you food for two for around 23$. Keep in mind though, that cooking by yourself is much cheaper.

Prices in markets are very reasonable in Almaty, especially if you go shopping for groceries in market chains such as Gros and Ramstore where you can find better quality and variety of food. You can also make it cheaper if you shop at open markets that pop up a few days a week, and here you can both find some fresh groceries and have a good time spending time with local vendors.

Transportation doesn’t function well in Almaty, although they do have a metro. It is relatively cheap though – not a bargain, again, and definitely not cheap in comparison to the service you’re getting – but still, cheap enough. A one-way ticket for public transport costs a very reasonable 0.21$ while a monthly ticket is just short of 20$.

If you’re living in an apartment that is on a larger side in Almaty, like 85m2, you will be expected to pay somewhere around 60$ a month. Internet is literally a bargain – 10$ a month for a high quality service, so you could say that utilities are definitely cheaper than in most European and American countries.

Practicing sports or enjoying yourself some gym or fitness time will be relatively expensive wherever you go. But in Almaty, at least, they’re not robbing you blind – it’s somewhere around 50$. If you want to go to a cinema, a ticket for one seat costs around 4$, so if your plans include taking someone to see a movie, set aside around 10$.

Shopping for clothing, however, isn’t as cheap as you would expect seeing how everything else is cheaper in this city. Sure, you can find quality jeans like Levi’s that cost less than 50$ which is very reasonable, but in comparison to that, a simple shirt costing more than 30$ is definitely expensive.

Given the average salaries in Almaty, one might argue that rent is through the roof, especially if you’d like to rent somewhere in the city. So the rent does make it difficult to sort out your expenses, which is why it might be cheaper to look at the apartments outside of city centers. An apartment in the city center costs a little more than 300$.

How Does the Average Person Spend Their Money in Almaty?

The average person in Almaty spends most of their money in supermarkets, open markets and other chain stores – which means the biggest bulk of their salaries is spent on food..

The rent is, however, the next on the list of expenses, because when you look at average monthly salaries, they are really high.

Restaurants are somewhat pricey which makes them third on the list of most common expenses in Almaty, along with transportation that has to be paid and is an everyday necessity so it, naturally, draws a lot of funds.

Those who don’t have high salaries will have a hard time affording anything else after paying their rent fees.

Average monthly net salary is around 350$, so those who earn that much money will also have a hard time making ends meet, if they’re renting.

If you want to spend a month in Almaty, around 700$ would definitely suffice.

What About Travel Safety in Almaty? 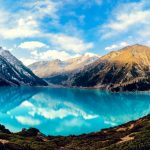 Cost of Living by City in Almaty